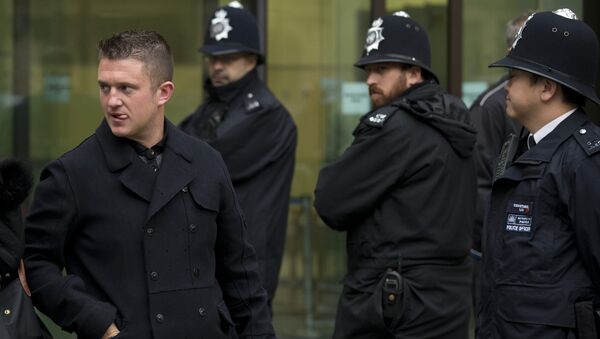 Robinson, real name Stephen Yaxley-Lennon, arrived at the court on the morning of May 25 and quickly began spilling details about a long-running case, broadcasting the names of defendants and the charges and details of the allegations they faced, as well as filming the defendants and confronting them as they arrived at court.

His actions breached a strict order — which remains in place — imposed by the judge, banning public dissemination of any details relating to the proceedings. The video was viewed by around 250,000 people. 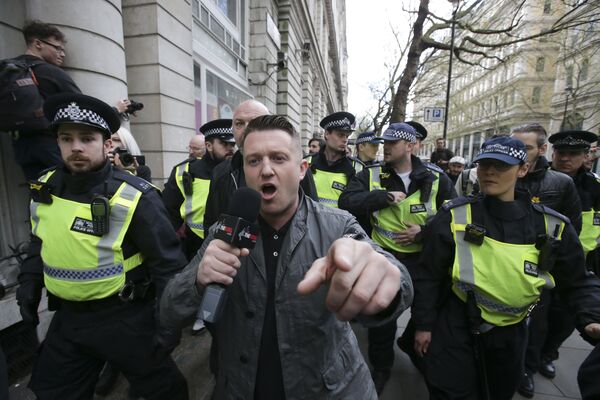 (File) Stephen Christopher Yaxley-Lennon, AKA Tommy Robinson, former leader of the right-wing EDL (English Defence League) is escorted away by police from a Britain First march and an English Defence League march in central London on April 4, 2017
© AFP 2021 / Daniel LEAL-OLIVAS
However, the livestream was abruptly halted when a number of police officers arrived at the scene and arrested Robinson. It would be a mere five hours before he was charged, and sentenced — receiving a 10-month custodial stretch for contempt of court, and a further three months for breaching the terms of a previous suspended sentence received in May 2017.

Then, Robinson similarly attempted to film defendants during a rape trial in Canterbury, Kent — in his own subsequent trial, the judge made clear his custodial sentence was contingent on him ending such activities.

In sentencing Lennon, judge Geroffrey Marson QC said the "integrity" of the Leeds crown court case needed to be upheld, and it could cost taxpayers "hundreds and hundreds of thousands of pounds" if a retrial had to be held. He also suggested Lennon's video had referred to some charges that had not proceeded against some of the defendants.

"Nothing may occur which will prejudice the trial. Everyone understands the right to freedom of speech but there are responsibilities and obligations. Not only was it a very long video but I regard it as a serious aggravating feature he was encouraging others to share it and it had been shared widely. That is the nature of the contempt," Marson said. 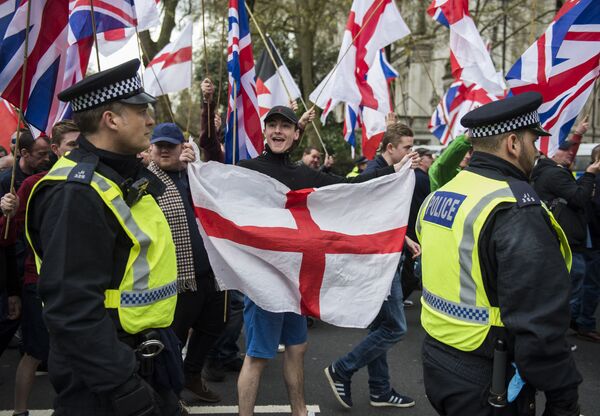 Britain First and EDL (English Defence League) protesters walk along Northumberland Avenue during a demonstration in London, Saturday, April 1, 2017.
© AP Photo / Ben Stevens
Robinson's trial was also subject to reporting restrictions, put in place temporarily to avoid further prejudicing the outcome of the Leeds trial, but the gag order was lifted May 29 after a judge heard the order was already being thoroughly violated online. Both supporters and opponents of Robinson the world over had broadcast and discussed his conviction widely on social media platforms, with high profile figures including Dutch Party for Freedom leader Geert Wilders and Donald Trump Jr. backing the EDL founder.

​In a video posted to Twitter, filmed from outside the British embassy in The Hague, Wilders described Robinson's prison sentence as "an absolute disgrace," and said freedom of speech was being violated all over Europe, with authorities "trying to silence us."

Moreover, in the hours after his arrest a petition was posted on Change.org calling for his immediate release from police custody — it quickly gained over 100,000 signatures, a figure that increased substantially once news of Robinson's conviction leaked into the public domain. As of May 30, it has attracted 511,575 supporters.

​In the petition's accompanying statement, which is reproduced in Czech, French, German, Italian, Polish and Russian, Robinson is described as having been jailed for "reporting on Muslim grooming gangs," a "job he chooses to do with no regard for his own safety, informing the public of all the wrongs committed in the name of Allah."

"Fighting against adversity and reporting on issues that our mainstream media are too afraid to speak of. Tommy is raising issues that are affecting all of our communities, and that are being swept under the carpet and hidden from the public. Its time we stand together, stand strong, and stand by his side," the statement reads.

Robinson's arrest also sparked sizeable protests in Whitehall on May 26, with supporters carrying placards reading ‘#FreeTommy' and waving flags — including the St George's Cross, Union Jack and Ukip logo — and shouting "shame on you," among other condemnations. At least one attendee carried a 'White Lives Matter' placard. Footage showed some protesters involved in minor scuffles with police.

Robinson co-founded the EDL in 2009 and has been arrested on several occasions, both at demonstrations and fights between opposing football fan gangs, and received custodial sentences for other, non-political offenses. In October 2012, he was convicted of using someone else's passport to travel to the US, and received 10 months' imprisonment. He was released on electronic tag after serving just over a month of his sentence on February 22 2013, whereupon he reported he was dismayed to discover the EDL's ranks were now home to former British National Party members and neo-Nazis.

In January 2014, Robinson was convicted of three counts of conspiracy to commit fraud by misrepresentation in relation to a mortgage application, along with five other defendant and sentenced to 18 months imprisonment. While at HMP Woodhill, he was attacked by several other prisoners, leading him to be moved to HMP Winchester. In June 2014 Robinson was released on license, the terms of which included having no contact with the EDL until the end of his original sentence (June 2015). He was recalled to prison before long for breaching the terms of his licence, before being released in November 2014.

​In the mean time, Robinson left the EDL, announcing at a press conference in October 2013, convened by anti-extremism think tank Quilliam, that concerns over the "dangers of far-right extremism" had forced him to rethink his own views. However, after his release from prison in November 2014 he became involved with Pegida (Patriotic Europeans Against the Islamisation of the West), a German organisation founded in Dresden amid the European migrant crisis, which is accused of virulent Islamophpobia. He has also been associated with members of the ethno-nationalist Generation Identity movement, whose leaders have been banned from entering the UK.

000000
Popular comments
No free speech in the UK. Please go to...change.org....and vote to free Tommy Robinson. Tommy was jailed for speaking out against Muslim rape gangs, who operate in every town and city in the UK. Tens of thousands of children 13 years of age and under have been raped. I am ashamed to be born British, ashamed of my country.