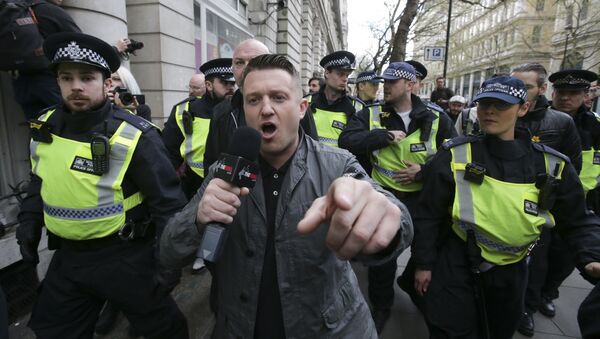 Jon Gaunt
All materials
Tommy Robinson was a complete and utter fool and an idiot for his actions outside Leeds Crown Court last week and deserved to be sent to Prison.

I like Tommy and I have, unlike many of his fanatical supporters, met him many, many times and interviewed him on various shows that I have hosted.

I firmly believe that the debate he wants to have about rape gangs is vital and he needs to be an integral part of that debate. The Establishment elite and the MSM should include him as we need to understand his and his follower’s concerns urgently.

However, none of this excuses his Facebook Live stream outside Leeds Crown Court last week.

Tommy knows all about contempt of court as he was found guilty of that offense in Canterbury last year. I remember at the time asking him, and the people who were backing him, if he understood the law and that he could be prejudicing that trial and also telling him that he should wait until the verdicts come in before commenting.

Look, I fully understand his frustration and share his follower’s belief that the mainstream press, the judiciary, and the Police have not taken the Pakistani Muslim rape gangs seriously enough. I also agree with the feeling within largely working-class communities that Muslim criminals are being treated with politically correct kid gloves. I believe in one law for all, which is why I am against any form of Sharia in the UK. I know that all of this fueled Tommy last week but I am afraid it was a classic case of emotion overriding the intellect.

I also have to ask this question; if Tommy is so concerned about the victims why did he do a Facebook live stream outside the court, including filming the defendants, which could have jeopardized the whole trial and denied the victims justice?

The Slow Death of Free Speech in the UK
I am afraid there is no two ways about it, the time for protests are when the verdicts come in and there are no reporting restrictions, not before.

I have to agree with Former Chief prosecutor Nazir Afzal who tweeted that offenses like Robinson’s can lead to a trial collapsing, as the jury may be hampered in delivering a fair verdict.

He said on Twitter that stunts like this, "nearly lost the so-called Rochdale grooming case (#Three Girls) cos of a far-right communication."

He added in another tweet that: "Their lawyers applied at their trial that the jury had been prejudiced by Far Right. We had to fight to persuade Court to allow trial to continue. Those criminals came close to being freed & victims close to getting NO justice. Jury must decide on EVIDENCE, not on your OPINION."

Nazir Afzal is correct and that is why on the actual offense issue of contempt, Tommy and his supporters have not got a leg to stand on.

However, where I do have sympathy for Tommy is that it is clear his arrest was politically motivated.

Tommy was enticed into a well-laid trap. He walked in and scored a massive own goal.

You have to ask why did the Police allow him to broadcast for up to an hour before they arrested him? It was a live stream which they must have been monitoring so they could have approached him way before 10 thousand people were watching?

The video has now been seen by over a quarter of a million people. Why didn’t the cops tell him he was breaking his suspended sentence guidelines and insist he cease and desist.

Why was he arrested for a breach of the peace and not contempt?

I think it was clear that the State was determined to make a massive example of Tommy and he fell for their trap.

This now allows them and the MSM to further their narrative that Tommy and by inference his supporters are all knuckle dragging racists and the real danger to the wider community in the UK, in essence, that he and his fans are the criminals not the men on trial and those that will inevitably follow.

London Holds 'Day of Freedom' Protest Aimed to Protect Free Speech (VIDEO)
His actions allow them to lock him up and take him out of the debate.

It also allows the Judge to place an Orwellian reporting restriction on his arrest and imprisonment.

And all of this is as a result of Tommy’s foolish actions.

He is hardly able to make his points when the verdicts are delivered from behind a cell door is he?

I understand the frustration of his supporters and I support and cheer their passion and commitment in organizing a peaceful protest in Whitehall on Saturday to protest Tommy’s imprisonment and they were right to describe the event as an attack on free speech.

But what Tommy did outside the courtroom was not free speech but contempt of court and he knew it.

Where the attack on free speech comes from is in the Judges reporting restriction which meant all discussion in the dinosaur Main Stream media was stopped so again real debate was silenced. However, the judge had not reckoned with the power of social media.

Rallies Against, in Support of Immigration Took Place in London on Saturday
His actions were totally disproportionate and just added power to the protestors argument that the Judiciary and MSM are not taking their views seriously or treating the Gangs with kid gloves because of religious and political concerns.

These are dangerous times that we are living in and the fact that nearly half a million people have already signed a petition demanding Tommy Robinson’s release should send both a shiver down the spine of the Establishment and also prompt them to urgently start debating the issue of Muslim rape gangs.

No more should opposition front spokespeople be removed from stating that we appear to have a problem with young Pakistani men. We need to stop shooting the messenger and instead get the perpetrators in our crosshairs of our legal system.

Shady: UKIP Wants to Ban Burqas Because They Cause Vitamin D Deficiency
It is evident that in both the rape gang issue and terrorist offense all Western leaders are terrified of using the M word or The I word to describe the motives of the attackers and this is prompting large swathes of the population to get angry.

Politicians act like this because they fear a backlash from the wider community but ever since 9/11 and 7/7 the facts do not support their fear.

I am not suggesting that have not been any anti-Muslim attacks because of course there has been and I condemn them wholeheartedly but it is also a fact that has not been mass riots also.

But I truly believe this the refusal of mainstream politicians to engage in this debate and to admit that there is a major problem that is not historic and is actually still happening in most of our large cities will could to an explosion of violence on the streets that no one wants.