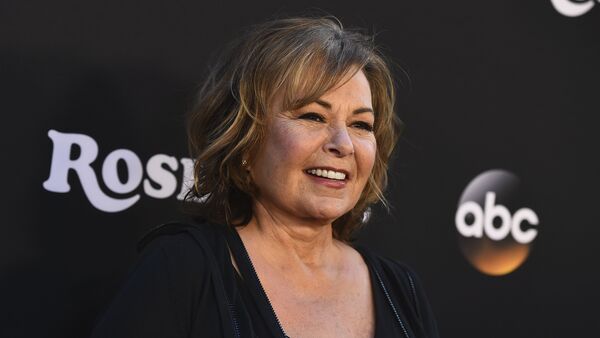 © AP Photo / Jordan Strauss
Subscribe
International
India
Africa
Taking shots at comedian Roseanne Barr, pharmaceutical company Sanofi fired off a tweet on Wednesday, saying that while the sleeping drug Ambien does have side effects, racism just isn't one of them.

Sanofi's full statement reads, "People of all races, religions and nationalities work at Sanofi every day to improve the lives of people around the world. While all pharmaceutical treatments have side effects, racism is not a known side effect of any Sanofi medication."

The company's response followed Barr's strange explanation of the early Tuesday Twitter rant that got her show cancelled as a terrible Ambien-fueled mistake. That morning, she suggested on Twitter that former Obama administration adviser Valerie Jarrett was the child of the "Muslim Brotherhood & planet of the apes." Jarrett, who is African-American and was born in Shiraz, Iran, is neither Muslim nor a member of the Muslim Brotherhood.

Though the 65-year-old promised to leave Twitter after issuing her apology, stating that it was a joke gone bad, she didn't manage to stay off the social media platform for long. Retweeting memes and fans defending her hours after news broke that her ABC show had been cancelled, Barr blamed the mishap on the fact that she'd consumed some Ambien.

"It was 2 in the morning and I was Ambien tweeting — it was memorial day too — i went 2 far & do not want it defended — it was egregious Indefensible," Barr wrote in a since-deleted tweet. "I made a mistake I wish I hadn't but… don't defend it please."

It should be noted that Barr isn't the first person to blame Ambien for a bad decision. In 2012, Kerry Kennedy, Sen. Robert F Kennedy's daughter, blamed the sleep aid for a drugged-driving incident, USA Today reported. Ambien also played a role in the downfall of golf star Tiger Woods after police found him asleep in his car in the middle of the highway after ingesting the drug.

Barr has since stated that she would be addressing the entire controversy on Joe Rogan's podcast, "The Joe Rogan Experience," this upcoming Friday.

Not one to shy away from the Twitterverse, US President Donald Trump even jumped in on the conversation by criticizing Disney CEO Bob Iger, who supported ABC's decision to cut ties with the 2018 revival of the late 1980s-90s sitcom, "Roseanne." Disney owns both the ABC television group and ABC News.

"Bob Iger of ABC called Valerie Jarrett to let her know that ‘ABC does not tolerate comments like those' made by Roseanne Barr," Trump tweeted Wednesday. "Gee, he never called President Donald J. Trump to apologize for the HORRIBLE statements made and said about me on ABC. Maybe I just didn't get the call?'"

Both Trump and Barr have been longtime supporters of each other.

Jarrett has since stressed that Barr's remarks should be seen as "a teaching moment."

​Speaking on an MSNBC town hall program that aired late Tuesday, Jarrett said that she was "fine" and that she was more "worried about all the people out there who don't have a circle of friends and followers who come right to their defense."

"The person who is walking down the street minding their own business and they see somebody cling to their purse or want to cross the street; or every black parent I know who has a boy who has to sit down and have a conversation, 'the talk,' as we call it," she said. "As you say, those ordinary examples of racism that happen every single day. I think that is why I am so glad to be here this evening talking with all of you."

ABC's reboot of "Roseanne" garnered an average of 18.1 million viewers, according to The Hill. Shortly after the show aired in March, it was renewed for a second season. That season will now not be produced.