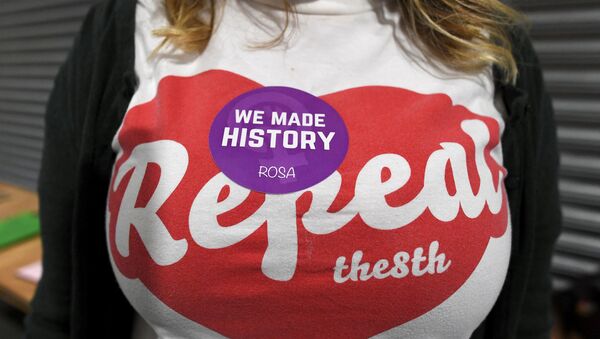 Ireland has voted to drop a constitutional amendment that gives equal rights to a mother and a fetus, effectively repealing a ban on abortion. The Eighth Constitutional Amendment will be dropped after more than 66% voted in favor of the move. Sputnik discussed this with Mary McAuliffe, a professor of gender studies at University College Dublin.

Sputnik: In your view how significant is the result of the referendum?

Mary McAuliffe: It’s a very significant result, you could almost call it a very historical result. This means that Irish women, for the first time since the Eighth Amendment was put into the Constitution in 1983, will now have the right to choose. The legislation, that will be introduced, will introduce abortion up to 12 weeks with no reason as to choice to be given, and after that, if the health of the woman is in danger, not just her life, as had been the case in the previous legislation. So this was a historic day, a day for Irish women to celebrate their agency, their choice and their bodily autonomy.

Sputnik: How many Irish women were forced to go abroad in that period of time? Was this something that was quite common, were women going abroad to the UK or other countries?

Mary McAuliffe: Yes, some of them were going to the Netherlands. It was reckoned that between 9 and 12 women a day were going and in the last few years at least 3 women a day were accessing the abortion pill on the Internet; so between 12-13-14 women a day were accessing some type of termination of pregnancy, either by travelling abroad or by accessing the abortion pill; and they reckon between 170,000 and 200,000 women have accessed abortion services since 1983. So the amendment never actually stopped abortion in Ireland, it just forced those women, for whatever reasons made that choice to terminate their pregnancy, to undertake journeys, often taking those journeys in silence and shame, and stigma, and doing so without full backup of healthcare at home; because when they come back they never told anybody they had done this, including their doctors.

Sputnik: I can imagine that was actually quite detrimental to health for a lot of people, there may have been experiments with this abortion pill as well, it’s quite a dangerous endeavor to take an abortion pill, it’s not just you've taken it and it’s all good.

Mary McAuliffe: Oh no, it was terrible because it was illegal, and if a woman had to take it in secrecy and privacy of her own house and couldn’t do it under a doctor's supervision because if a doctor was found to be aiding a woman taking the pill, he or she could face up to 14 years imprisonment. So the abortion pill was being taken in secrecy and that was very dangerous for women’s health.

Sputnik: Would women then face criminal prosecution if they were to call a doctor, or go to a doctor and it was found out that they had accessed this abortion treatment?

Mary McAuliffe: Yes there was potential of that, but that has never happened in the south of the country, but in northern Ireland, where similar laws exist, although it’s legislation, not constitutional, women have been prosecuted for ordering the abortion pill. But so far in the south, that hasn’t happened. In this referendum, if this Eighth Amendment hadn’t been voted out of the constitution, the potential was there that women could be prosecuted.

Sputnik: With the results of this referendum and a very, very strong result, over 66% voting in favor of getting rid of the Eighth Amendment, what are the changes that are going to happen and how fast will this happen? I’m also wondering people if people who had faced criminal prosecution, and perhaps, are even doing time, will something happen as far as them being amnestied or released, or something like that?

Mary McAuliffe: Well to answer that question first, there are no people who face prosecution or are doing any time because the government never actually engaged with criminally charging anybody on this. In terms of the legislation, there’s already a draft legislation on the books that the government brought in before we had the constitutional vote, so we were also more or less voting on that, and that gives women in Ireland the choice to have a termination for whatever reason, socio-economic or for reasons of health or for fatal fetal abnormalities, up to 12 weeks; and after 12 weeks one can have a termination on request of one’s doctor and consultant if there is a danger to the health of a woman and that includes mental health danger, as well as physical health if there's a fatal fetal abnormality. But it is quite restrictive, it does not allow abortions in the case of disability or in the case of down syndrome, or various other things like that, so it is in line with most European norms to have that 12 weeks and then restrictive access after that, that is decided by the woman and her health care team.

Sputnik: With this Eighth Amendment in place since 1983, it’s going to take some time for these services to actually be offered on the territory of Ireland, or do you think women are able to go and have an abortion already?

Mary McAuliffe: No, abortion still remains illegal, the Constitution hasn't technically been amended, it will take a few weeks for that to go through the houses of parliament, and then the legislation will take a number of months to go through, and our prime minister said that it will probably be in place before the end of the year, so we would look at late autumn to have that legislation in place; so in the meantime Irish women who today, or tomorrow, or next week make the decision to terminate their pregnancy will still be travelling to the UK and to the Netherlands, or still ordering the abortion pill. It will be later this year before all that is put in place.