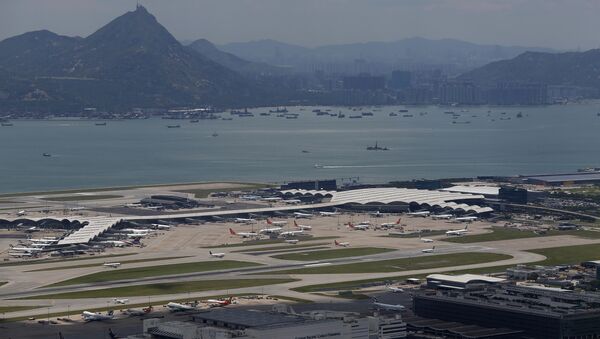 Kristian Rouz — Hong Kong continues its stretch of robust economic expansion despite the lingering risk of an economic slowdown in mainland China and newly emerged challenges of possible disruptions in the international exchange of goods, services and capital flows.

According to official data, Hong Kong's economy grew 4.7 percent year-on-year in the first quarter of this year, which is its fastest since mid-2011. The self-governing city is capitalizing on its high investment appeal and an ongoing rally in its stock market, backed by expensive Hong Kong properties and buoyant business activities.

However, recent developments in monetary policies of the US Federal Reserve, along with a gradually improving broader US economy, are posing a challenge to Asia's largest financial hub. Over recent months, many major institutional and individual investors have opted for US assets, pulling their capital from Asia.

Hong Kong has so far remained unscathed though, albeit some say it's only a matter of time until the city starts bleeding money in the face of skyrocketing investment appeal in the US.

According to the World Competitiveness Index, compiled by the IMD World Competitiveness Center in Switzerland, the US has outperformed Hong Kong this year for the first time since 2015. The US's rating stands at 100 points, whilst Hong Kong is falling behind at 99.162 points — mainly due to declining affordability, which is pushing labor costs and costs of doing business higher.

"The affordability of housing has gone down after 2016, and the waiting time for public rental housing has also gone up," Hong Kong lawmaker Fernando Cheung Chiu-hung said.

The US and Hong Kong are closely followed by Singapore, the Netherlands and Switzerland, whilst the likes of the UAE and Canada are ranked seventh and 10th, respectively.

Meantime, Hong Kong's robust economic growth could moderate this year amidst a combination of risks coming from mainland China and the US, along with their ongoing trade dispute.

"We think this is probably the peak for (Hong Kong) growth this year," Chang Liu of London-based Capital Economics Ltd. said. "Strong global demand should keep exports growing at a healthy pace over the months ahead, but rising interest rates in Hong Kong are likely to weigh on the domestic economy."

The Hong Kong Monetary Authority (HKMA) has been traditionally following changes in US monetary policies, not least due to the Hong Kong dollar's FX rate being pegged to the greenback at a fixed rate.

The most recent interest rate hike by the US Fed prompted the HKMA to buy over HK$50 bln in order to maintain capital flows uninterrupted, as Hong Kong's central bank failed to adjust its interest rate regime in a timely fashion.

"Since April, Hong Kong spent at least $9 billion defending its peg to the US dollar. The city's monetary authority is reminding speculators it has $434 billion more in firepower" @NAR

The HKMA still has some $434 bln in foreign reserves, giving it plenty of wiggle room to assess the effects of the US monetary policies before mirroring the Fed' decisions.

Meanwhile, a possible decline in the volumes of bilateral trade between the US and mainland China could hit Hong Kong, as its seaport is one of the main transit hubs for container ships headed from China to the US and back.

Additionally, Hong Kong's Stock Connect scheme is instrumental in ensuring smooth capital flows from mainland China to overseas markets, including the US. A decline or reversal of capital movements could impair Hong Kong's margins from operating the scheme.