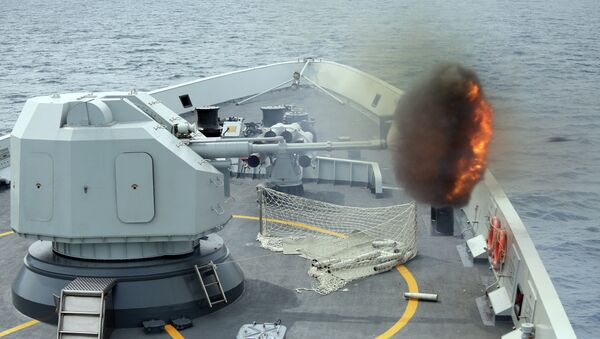 "The military drill sends a message to the US that it should stop backing the separatists on the island," said professor Li Zhenguang of Beijing Union University's Institute of Taiwan Studies.
Cross-strait relations have reached a low point, the professor noted, as a result of those in Taiwan who want "independence of the island," Li said.

Beijing has consistently named Taiwan as one of its most important policy priorities. But for all of the PLA's war drills in the sea and in the air, Sam Roggeveen of the Lowy Institute in Australia argued May 23, "China isn't planning to storm Taiwan's beaches."

The primary indicator that China will not launch a Normandy-style amphibious invasion, Roggeveen argued, is that its shipyards haven't spit out enough amphibious assault vessels such as tank landing ships. "Why, in the midst of a massive modernization drive, has the PLA-Navy not built the forces to conquer Taiwan," he asks, especially since building assault vessels is well within China's technical capability.

Most of the unprecedented buildup in China's naval forces has been in the former of bigger ships that are more useful for longer range missions, he noted. Taiwan and China, on the other hand, are only separated by the 110-mile-wide Taiwan Strait.

Instead, Roggeveen said, "my guess is that the PLA has decided that, even with a massive amphibious fleet, retaking Taiwan by force would be incredibly costly in lives and resources."

Li stated in an April op-ed published in the China Daily, which is owned by the Communist Party of China, that "the mainland has repeatedly made it clear that it seeks peaceful cross-strait relations but only under the One China principle. And the live-fire drill is an important strategic step to warn Taiwan separatists that they should mend their ways." Beijing's navy held live-fire drills in the Taiwan Strait late last month as well.