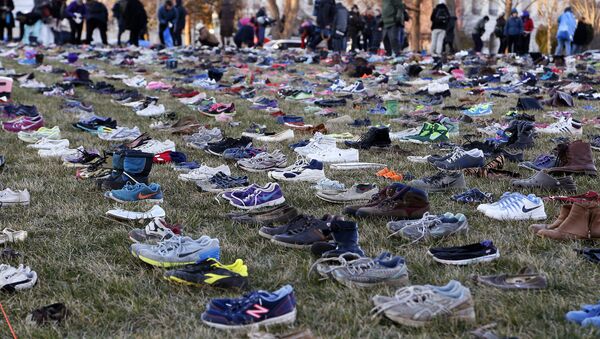 The plot is quite simple: you either choose to be  part of the SWAT team that turns up at a shooting location to deal with an accident — or you assume the role of an assailant shooting down students. Revived Games, which developed the new game, separately offered a so-called "civilian" version, also on the Steam hosting site, where players simply try to survive as civilians in an active shooting scenario.

Those affected by gun violence, as well as social media users in general, immediately stood up against the hair-raising game, its developer, the website that hosts it and the publisher ACID. Steam quickly removed the game from its platform after a specially launched petition on change.org racked up over 200,000 signatures.

You have BEEN HEARD! Wellll done to every single person that stood up against this game!

ACTIVE SHOOTER has been DROPPED by Steam! 👏 pic.twitter.com/KvgPQ8WQIo

Active Shooter's now gone from Steam. The developer was a notorious asset flipper under a new name to boot.

So yeah, definitely a hill worth perishing on, that one.

"I have seen and heard many horrific things over the past few months since my daughter was the victim of a school shooting and is now dead in real life. This game may be one of the worst," wrote Fred Guttenberg, whose daughter Jaime died in the Parkland School shooting in Florida in February in which 17 were killed.

Just heard on the radio that a video game is set to come out that the goal is to be an active school shooter. You can play the role of the shooter or Swat team. What the hell is wrong with people! How can you profit off the death of children???? #NeverAgain

The company that made "Active Shooter" is repulsive, and should go belly up ASAP. However the answer is not to allow our Government to pull the game. This is exactly what liberals want. "Censor" them by not buying the game and not letting your kids buy it.

Some users, however, view the game solely as a drill:

I just dreamt I disarmed an active school shooter with a wand and a couple of solid Hermion Granger charms, jesus, why is that a thing

There are already other shooting games that allow people to roleplay mass rampages, including the extremely popular Grand Theft Auto. Active Shooter gave a new twist to the debate, raising questions as to whether a game can offer a platform to train and meticulously plan shooting attacks.

The right to carry guns and the debate over the Second Amendment to the US Constitution, which enshrines it, continue to be hot topics in the US.

In one of most recent attacks, the May 18 shooting in Sante Fe, Texas, 10 people were killed and another 10 injured.