Whistleblowers Praised at Award: LuxLeaks Would Never Have Happened Without Them 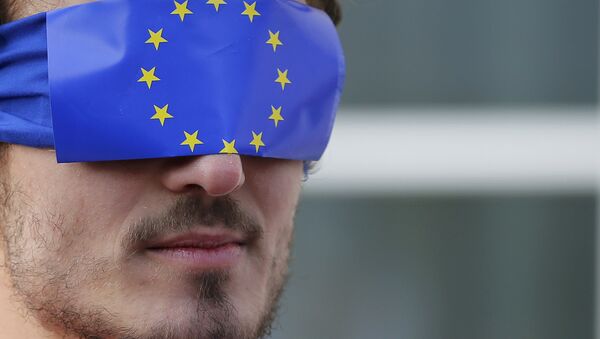 A left-wing European Parliamentary group has introduced an award for all those whistleblowers who have been “intimidated and persecuted for uncovering the truth and exposing it to the public.” The award went to the former PricewaterhouseCoopers employee involved in LuxLeaks, Raphaël Halet and the slain Slovak investigative journalist, Jan Kuciak.

Sputnik has reached a member of Unit Press & Communications in the European United Left/Nordic Green Left (GUE/NGL) European Parliamentary Group, Ben Leung, to find out more about the “Journalists, Whistleblowers and Defenders of the Right to Information” award.

Mr. Leung told Sputnik that it was “conceived by our Greek MEP, Stelios Kouloglou,” a member of the left-wing SYRIZA party, who also used to be a journalist and documentary maker.

“He was part of the Parliament’s Panama Papers committee, and got to know the Daphne Garuana Galizia family well. Without whistleblowers, the likes of LuxLeaks and Paradise Papers would never have happened,” Leung said.

Assange Associate Doubts US House Wants to Know Truth About 'Russiagate'
He elaborated that Kouloglou supported the LuxLeaks whistleblowers and “felt compelled to act for recognizing such men and women for their bravery.”

According to Leung, another reason for the introduction of such an award is that “there are still no proper EU legislations that protect whistleblowers and journalists,” which prompted Kouloglou to create one.

As is known, this year’s award was held in honor of Daphne Garuana Galizia, the investigative journalist, who was assassinated in a car bomb in Malta last October. Galizia used the Panama Papers to expose Malta’s leadership’s, including the island’s Prime Minister Joseph Muskata, alleged links to offshore tax havens. The fact that her murderers haven’t been caught yet, “and no legislations have yet come into place to protect her profession,” contributed to the decision to honor her in that way, with the permission of her family.

#HappeningNow: At the "Journalists, Whistleblowers and Defenders of the Right to Information" award ceremony organised by @GUENGL and this year named for #DaphneCaruanaGalizia in the European Parliament.

The fight for change, justice & accountability goes on. pic.twitter.com/VqFcoMer7r

The shortlist of nominees included WikiLeaks founder Julian Assange, who exposed thousands of US classified documents related to military operations, and a Russian national, who is believed to have been an informant of the late journalist, Daphne Caruana Galizia, Maria Efimova, a former bank employee that uncovered alleged corruption relating to high-ranking Maltese officials.

Beyond Assange and Efimova, the list included Gjorgji Lazarevski and Zvonko Kostovski, two Macedonian intelligence officers who accused then-Prime Minister Nikola Gruevski of wiretapping more than 20,000 people; Jan Kuciak, a Slovak journalist that focused on investigating tax fraud of businessmen with alleged ties to high-ranking politicians and who was murdered in February 2018; Raphaël Halet, a former PricewaterhouseCoopers (PWC) employee behind the Luxembourg Leaks, exposing the company’s tax evasion in Luxembourg.

GUE/NGL tweeted on May 29 that the inaugural award went to Raphaël Halet and Jan Kuciak:

The process of picking the nominees appeared to be quite intriguing, as the nominations are suggested by the public.

“We received hundreds of responses from April 3 to 22, 2018, and the jury then deliberated over the nominees by Skype, before coming up with a shortlist of 5 in May.  Assange was included in the shortlist as many members of the public nominated him, and our jury took that into consideration when drawing up for the finalists. This was our first inaugural award of this kind, and Efimova’s inclusion also came as a result of the public nomination,” Leung explained.

He proceeded to say that Stelios Kouloglou “has been fighting on her behalf against extradition charges in Greece.” In April, Greece refused to extradite Efimova, who had turned herself in to police in March, to Malta, where authorities have accused her of defrauding her employer, Pilatus bank, which she claimed had been used to move funds for Maltese politicians.

A Greek court rejected Malta’s request for Maria Efimova's extradition and released her. It is a great victory not only for Maria Efimova but also for whistleblowers in Greece and around the world. We will continue our fight with them against global corruption. pic.twitter.com/BMzQzk7ZLt