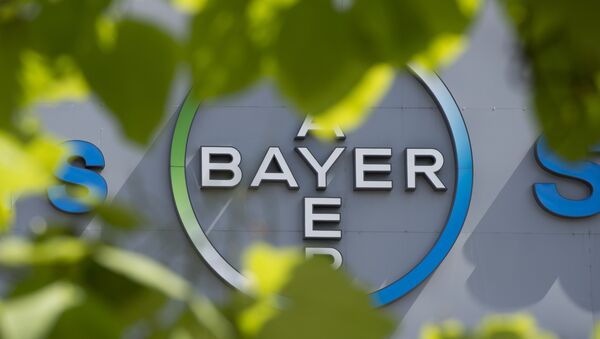 © AFP 2021 / JOHN MACDOUGALL
Subscribe
Despite rallies that erupted against the world's largest pesticide producers on May 19, the EU agreed to the controversial takeover, after conducting an in-depth investigation in March.

The US Department of Justice has announced that it will allow Bayer AG's $66 billion merger with Monsanto Co., but requires that the German company first sell off $9 billion in agricultural assets.

Head of the Justice Department's Antitrust Division Makan Delrahim said the asset sales agreed to by Bayer were the "largest ever divestiture ever required by the United States."

In agreements with global antitrust enforcers, Bayer acquiesced to sell its entire cotton, canola, soybean and vegetable seeds businesses and digital farming business, as well its Liberty herbicide, which competes with Monsanto's Roundup.

Bayer has consented to sell assets that include its seed and crop chemical activities, with revenues of 2.2 billion euros ($2.6 billion), to rival BASF for 7.6 billion euros.

‘Environmental Destruction’: US Farming Policy Favors Business Over Heartland
The German pharmaceuticals and life sciences company has stated it is going to close the deal soon. If it is not wrapped up by June 14, Monsanto could withdraw from the takeover agreement and seek a higher price.

As Bayer AG's shareholders continue to discuss the merger deal, hundreds of environmentalists have protested against it, demanding a more ecological approach to agriculture, without pesticides. They have also criticized the use of toxic pesticides in southern countries, the development of genetic engineering and the practice of seed patents.

In late 2017, Bayer stated that it was awaiting the close of the deal to buy the US biotechnological company Monsanto in early 2018 and it is continuing to work closely with authorities on all the permissions. The $66 billion merger, if completed, will create the largest seed and agricultural chemical company in the world.