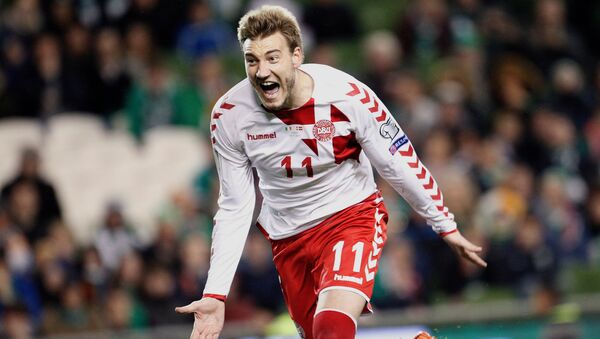 Danish striker Nicklas Bendtner, who is nicknamed "Lord" and enjoys a cult following, has suffered an injury, likely missing the upcoming World Cup. A viral petition in his support proposes to either delay the tournament or force all players to play on only one leg to allow him to compete.

Danish football player Nicklas Bendtner, who is celebrated in the soccer world as a seemingly endless source of memes, appears to have added another one to his portfolio.

This weekend, Bendtner came down with an injury during a match he played for his club Rosenborg, Norway. A petition appeared the following day urging the international football governing body FIFA to delay the World Cup until Bendtner is fit again.

"We are not unreasonable. We understand that injuries are commonplace in football and that Bendtner is only human. So what we propose is not cancelling the World Cup but merely delaying it until such a time that Nicklas Bendtner is able to compete in it," wrote Soccer Memes, which is behind the petition.

Hi everyone, we've created a petition to delay the World Cup until Nicklas Bendtner is injury free again. Please sign and share:

​To add another layer of absurdity, Soccer Memes also proposed enforcing a rule to make all players play on only one foot (whichever one Bendtner didn't injure) in order to allow him to compete.

While the petition initially set a modest target of 2,000 signatures, it had soon amassed over 5,200.

Bendtner has a cult following and is often referred to as "Lord Bendtner." The nickname first appeared around 2009, when he started dating Baroness Caroline Luel-Brockdorff. In 2015, Danish celebrity tabloid Se og Hør bought him a square foot of land in Scotland to bestow him the title of Lord. Bendtner himself has been supportive of the joke, posting a picture of himself with the Ballon d'Or award and running as a candidate for prime minister in the 2015 Danish election. In Rosenborg, where he currently plays, he is often nicknamed "Emperor."