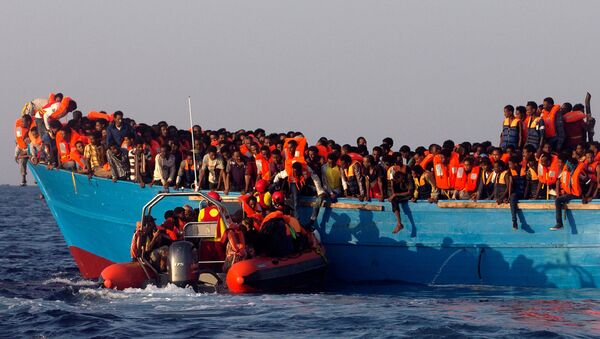 In his opinion piece published by the Berlingske daily newspaper, Peter Skaarup, the chairman of the Danish People's Party's parliamentary group, has penned an article warning of a new wave of immigration that may potentially exceed the 2015 migrant crisis.

At present, almost one fourth of the young people living in the Middle East are unemployed, Skaarup maintained, referring to reports from the International Monetary Fund (IMF). Unless drastic action is taken, millions more will join the scores of the unemployed each year, he wrote.

Director of IMF office for the Middle East and North Africa, Jihad Azour previously noted that at least 25 million jobs must be created over a five-year stretch to prevent unemployment from rising. Furthermore, Middle Eastern and North African countries need an annual economic growth of 6.2 percent just to keep unemployment at current levels, and none of the governments in the region is currently close to achieving the growth target.

According to Skaarup, the current outlook is gloomy and the European migrant crisis of 2015, when hundreds of thousands of asylum seekers sought to EU is only the beginning. Millions of unemployed young people will not wait for their corrupt and ineffective governments to implement reforms urged by the IMF. They can take matters into their own hands and flee to Europe, he warned.

"When a young Tunisian torched himself in desperation in 2010, he unleashed what was later dubbed the ‘Arab Spring.' His death led to massive uprisings first in Tunisia and then in a number of other Middle East and North African countries. Millions of people were tired of miserable living conditions, lack of opportunities and high unemployment. The future looked bright until religious extremists took the Spring and the entire region hostage. The Arab Spring has become an Arab desert hike. And now a new crisis is threatening," Skaarup wrote.

The Danish politician believes, despite all the differences, North African and Middle Eastern countries have a common denominator in being ineffective, corrupt and undemocratic, as well as a having a clan-oriented worldview and putting religion over state matters.

"There is good reason to apprehend a new wave of unemployed young people from North Africa and the Middle East crossing Europe's borders. We cannot sit just there waiting for this to happen," Skaarup concluded. "We must appeal to the region's governments to implement necessary reforms. If necessary, we must help them with it. But not take more of their young unemployed, as we already have too many," he added.

In 2015 and 2016 alone, over 2.5 million people applied for asylum in the European Union, which later became known as the European Migrant Crisis. The majority of asylum seekers mostly came from war-ravaged countries in the Middle East and North Africa and included both refugees and economic migrants.

Compared to its neighbor Sweden which took in some of the highest numbers of asylum seekers per capita in all of the EU, Denmark's contribution has been fairly moderate, only taking in 21,000 people in the peak year of 2015. The Scandinavian country has been tightening its immigration laws ever since.