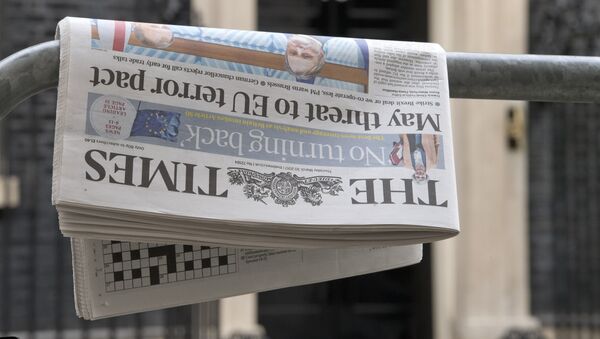 © AFP 2021 / Justin TALLIS
Subscribe
An event that brought together researchers, academics and journalists to discuss UK media and media bias in its reporting on Syria was shut down over the weekend following what appeared to be a coordinated effort to “smear and discredit” people asking questions about British foreign policy.

"It does seem to us there were indications of a broader coordinated campaign against individuals, and against groups of people, in order to smear or discredit," Piers Robinson, professor of politics, society and political journalism at Sheffield University, told Tuesday's edition of Fault Lines on Radio Sputnik.

​The event, "Media on Trial," was slated to take place May 27 from 2 to 5 p.m. in Leeds. Robinson, along with researcher Robert Stuart, professor Tim Hayward, former UK Ambassador to Bahrain and to Syria Peter Ford, and journalists Patrick Henningsen and Vanessa Beeley were to discuss the question of whether the British media was serving as a platform for terrorist groups trying to get out their message.

"Has the mainstream print and broadcast media violated legislation controlling the platforming of terrorist and extremist ideology and propaganda in order to achieve the foreign policy aims of their respective governments," organizers asked on the event description webpage.

​Robinson said he helped establish the Working Group on Syria, Propaganda and Media (SPM) about a year ago and has held successful "Media on Trial" events in London and Frome, England.

Following a front-page story in the British newspaper The Times on April 14 accusing SPM of "pro-Assad disinformation," Robinson said the group's planned event in Leeds began to fall apart.

"We had an event set up in Leeds, and it was to be held in a Leeds City Council building and, really, it was recruiting very well. Lots of people wanted to come to it. But then, following the Times articles attacks, it seems that a group of people were lobbying the council, telling them we shouldn't be allowed to speak on the grounds," Robinson told Fault Lines, hosted by Lee Stranahan and Garland Nixon.

The lobbyists "were quoting claims of allegations being made that we were conspiracy theorists, or Assad apologists, or war crimes deniers, and that we shouldn't be allowed to speak" at the Leeds City Council building, the professor said.

"It was pulled. Leeds refused to allow it to run, which was extraordinary. We were given no right to reply. We were given no opportunity to explain to the Leeds City Council that these were, in fact, smears which were being levelled against us — and they closed down the event."

Over the next few years, the group will examine the Leeds event cancellation as well as the role that think tanks and self-described grassroots movements play in shaping information about Syria, Robinson said.

000000
Popular comments
Britain ain't so great now, is she? How many journalists, bloggers, writers and academics are going to be smeared, jailed and possibly killed before the ghost of Lionel de Rothschild is exorcised out of parliament?