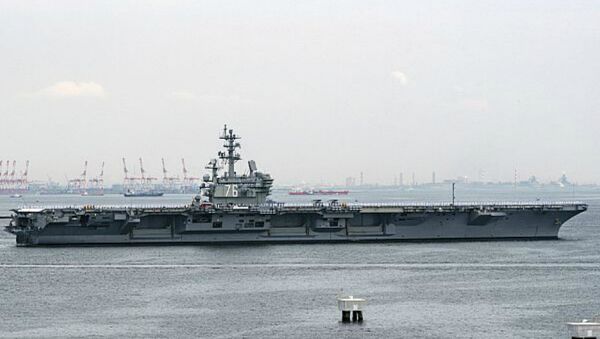 The US Navy’s only “forward deployed” aircraft carrier, based in Yokosuka, Japan, is back to sailing on the high seas following a nearly two-week delay in its deployment schedule.

The USS Ronald Reagan, one of the US' 10 100,000-ton super carriers, exited Yokosuka Naval Base on May 29, the US commander of fleet activities said Tuesday. The carrier was headed deeper into Tokyo Bay after leaving the base, according to a Military.com reporter aboard the sea vessel.

The Ronald Reagan Carrier Strike Group was slated to deploy on May 17 before a "material issue" arose during pre-deployment sea trials that took place from May 10 to May 17, the defense outlet reported.

"During operational testing and verification of all systems during sea trials, a material issue was identified that requires repair," Lt. Cmdr. Matt Knight, a US Navy spokesperson, said at the time.

It's not clear how long the carrier strike group's deployment will last. The deployment will consist of training in the US Navy's 7th Fleet area of operations and supporting "security and stability in the Indo-Pacific region," the Navy said Tuesday in a statement.

The strike group comprises the destroyer USS Mustin and the cruisers USS Antietam and USS Chancellorsville, along with the Nimitz-class carrier.