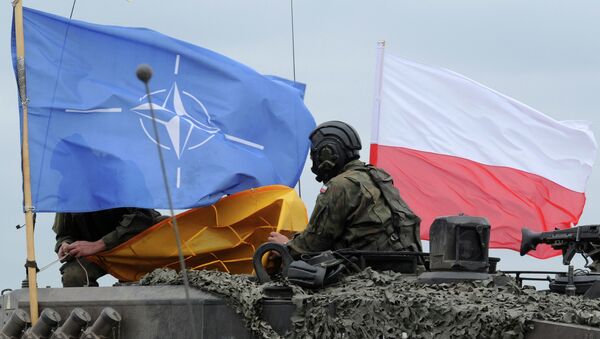 The Kremlin has commented on the deployment of a permanent US military base in Poland, which will cost the country $1.5-2 billion.

Reacting to the establishment of a US base in Poland, Kremlin's spokesman Dmitry Peskov underlined that Poland had a sovereign right to establish a US military base on its territory, stressing that Moscow, in its turn, was ready to react to the NATO's infrastructure expansion.

"It depends what kind of base it will be. In general, when we noticed the gradual expansion of NATO's military infrastructure towards our borders, the immediate approach of NATO's military structure to our borders does not in any way contribute to security and stability on the continent, on the contrary, these expansionist actions, of course, inevitably lead to counter-measures on the Russian side in order to balance the parity that breaks each time," Peskov told reporters on Monday.

Poland is ready to pay $1.5-2 billion for deployment of a permanent US military base in the country, a document called Proposal for a US Permanent Presence in Poland prepared by the Polish Defense Ministry said.

“This proposal outlines the clear and present need for a permanent US armored division deployed in Poland, Poland’s commitment to provide significant support that may reach 1.5 – 2 billion USD – by establishing joint military installations and provide for more flexible movement of US forces. Together, the United States and Poland can build an even stronger bond – one which guarantees the safety, security and freedom of its people for generations to come,” the document said.

The paper reflects the Polish readiness to share the burden of defense spending with the US government and to make the decision on deploying troops in Poland more cost-effective for Washington.

'Poland Wants to Be a Close Ally to US': Scholar on Patriots' Supply Contract
From the Polish Defense Ministry’s point of view, deployment of the US troops in Poland would send a message to Russia that Washington is ready to protect its allies in Eastern Europe.

“Permanent US troops in Poland will send a clear message to Russia of US support for its Eastern European allies,” the document added.

The country's authorities have confirmed the authenticity of the paper later in the day.

NATO has been significantly increasing its presence in Eastern Europe after the eruption of the Ukrainian crisis in 2014 using alleged Russian interference in the Ukrainian internal affairs as a pretext.

Moscow has many times voiced its protests against the NATO military buildup saying that this move will undermine regional stability and result in a new arms race.