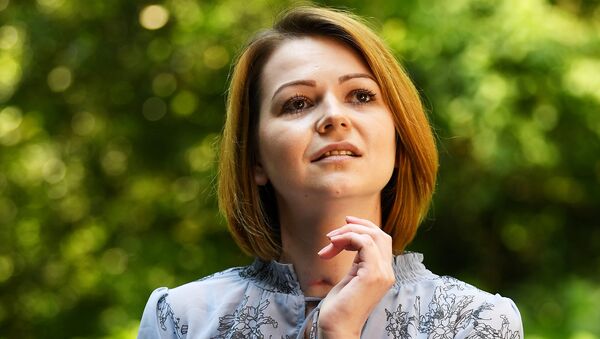 Yulia Skripal, who was allegedly poisoned along with her father in the British city of Salisbury, has given an interview to Reuters, according to a video released by the agency. In her first public testimony, she asked that her privacy be respected and expressed a willingness to eventually return to Russia.

Former Russian undercover agent and retired colonel of the Foreign Intelligence Service Andrei Bezrukov said in an interview with Sputnik that Yulia Skripal is being used by the same people that poisoned her.

"She says what she has to say in the situation, where people standing around her are asking her to react to everything that happens [in the world], using a written statement, justifying it with the fact that it will be easier [for her]. She is a toy in the hands of the people who organized this whole operation," he said.

The former Russian agent confirmed speculations previously expressed by other experts that the text Yulia read was clearly translated from English, as it contains phrases that are not typical for Russian.

He also expressed his opinion that Yulia's mind was majorly gas-lighted by the people watching over her, as they have either limited or distorted her sources of information from the outside world.

"She has no alternative source of information. Even entire newspapers can be printed specifically for her. It can easily be done on a computer. They wouldn't even need to force her to form the necessary opinion [on the issue]. […] After that she will always react in accordance with that opinion," Bezrukov said.

The former agent believes that the case of the Skripals is "absolutely convenient" for the UK, which, according to him, is trying to use it to maintain influence and to mend "holes in domestic policies," such as drops in ratings.

Yulia Skripal gave a video-interview on May 23 for the first time after she and her father, former Russian spy Sergei Skripal, were severely poisoned in Salisbury in the UK. In her statement, she asked that her privacy be respected and expressed a willingness to return to Russia, but declined the Russian embassy's offer to help. The Russian Foreign Ministry has expressed skepticism, saying that she might have read the text under pressure, pointing to odd phrases that are not typical for Russian.

UK Prime Minister Theresa May has accused Russia of organizing the attack against the Skripals, despite the official investigation into the incident not yet being concluded, and expelled 23 Russian diplomats as a punitive measure. A number of countries have supported the UK's claim and have also expelled more than 150 Russian diplomats.

The Russian side has denied all the accusations and suggested conducting a joint investigation, as well as demanded consular access to its citizens. However, the request and suggestion were ignored. Moscow has also expelled diplomats of those countries that joined in the British punitive measure and ordered the British Council to halt its activities in Russia in response to London's move.

Yulia and Sergei Skripal regained consciousness in April. The Russian embassy in the UK has sent multiple requests for consular access to Yulia, but the UK side claims that she has declined all requests. The Russian embassy remains skeptical about the UK's response and suggests Yulia could have been manipulated or threatened.