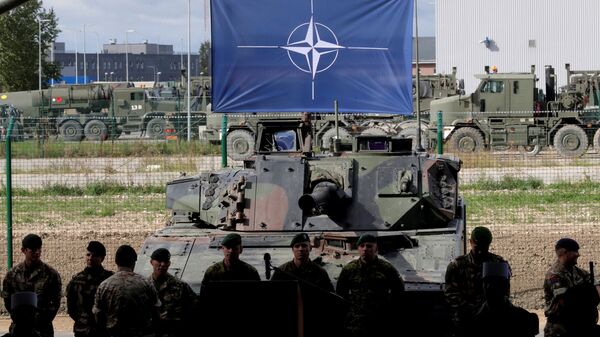 © REUTERS / Ints Kalnins
Subscribe
International
India
Africa
Poland is ready to pay up to 2 billion dollars for the deployment of a permanent US military base in the country, according to the country’s defense ministry. Radio Sputnik discussed Poland’s proposal to the United States with Konrad Renkas, a Polish political analyst and vice-chairman of the Zmiana party.

Sputnik: NATO has already decided to increase military presence in Poland. Why would Poland ask for more troops? What about the timing of all this? Is this important? Is it some kind of a symbolic gesture?

Konrad Renkas: Well, it's another aggressive gesture against Russia and against any kind of appeasement policy between Europe and the Russian Federation. As many times before, Poland is used as a useful idiot for the war hawks in Washington just to provoke a Russian reaction and of course to make any possibility of improving relations between especially Europe and Russia completely impossible. It is, of course not in Polish interests, it's only in the interests of the war hawks in Washington.

Sputnik: What kind of geopolitical risks could we emerging from an increased NATO presence in Eastern Europe?

Konrad Renkas: We have to define two things. First of all, in the military business the most important thing is that it is a business. So for Trump and the other rulers of  American policy, Poland and other European countries are only to buy American weapons, American military products. But, of course, on the other hand, if you had a shotgun on the wall in the theater, in the last act, it could shoot. So we have to be very, very careful.

READ MORE: Kremlin on US Base in Poland: Moscow Ready to React to NATO's Expansion

We have another 9,000 American soldiers with tanks and heavy armor near the Russian and Belorussian borders. It is not, of course, any kind of defense. It is a kind of aggression. It's a kind of tank iron fist that is pointed to Russia and to Belarus. And it is very, very big threat to  peace in the world, especially in  Central Europe, in the region of Ukraine and, of course, the Baltic States.