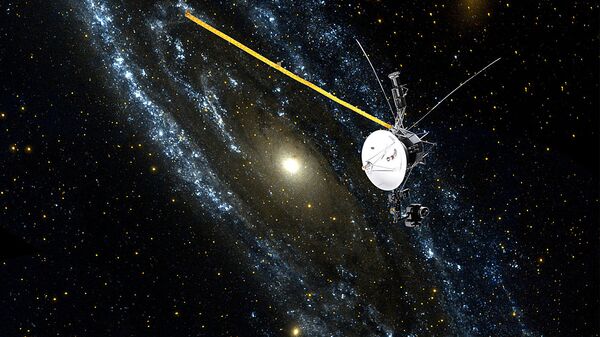 © NASA/JPL/Caltech
Subscribe
International
India
Africa
A historical record sent into outer space as a universal greeting card from humanity to alien life may in fact baffle any visitors and unintentionally create a hilarious image of humans. If the aliens have what passes for humor, or course.

The Golden Record, a set of Earth sounds and images on a gold-plated copper disk sent into outer space with the Voyager spacecrafts, could unintentionally perplex extraterrestrial researchers, say Rebecca Orchard and Sheri Wells-Jensen at Bowling Green State University in Ohio.

According to the researchers, rather than the peaceful, intelligent beings that NASA hoped to portray, humans may come across as a species that "loves to argue, speaks gibberish, and sees beauty in flowers that roar like chainsaws."

The researchers say that despite all efforts to the contrary, the record — which contains greetings in 54 human languages, sounds of Earth, including biological and man-made noises from tools and machines, and 90 minutes of Earth's music, is still way too human-centric.

"The Golden Record is a beautiful artifact and representation of how humans want to see themselves, but it is meant to be received by and interpreted by something that has the sensory capabilities of the average human," stated Orchard, according to the Guardian. "If the second one of these senses is absent, or an entirely different sense is added, the Golden Record becomes a bit confusing."

Space Becoming More Contested: UK Recognizes Potential Threats - Analyst
The two researchers examined the material on the recording and came up with some unexpected conclusions.

The string of greetings "pile up in a way that could be construed as arguing," Orchard said, noting that the "language" would appear to have "no grammatical congruity."

And that's if the aliens have ears to hear.

What the scientists consider to be the most confusing is the 90-minute record of Earth's music, ranging from classical to Javanese gamelan to Bulgarian folk music.

"I obviously can't say how these differences and transitions will be interpreted, but what I can say is that it definitely creates a puzzle for a listener who would be completely unfamiliar with humans and the noises they make," Orchard said.

Nonetheless, if any kind of confusion will happen, it will not happen soon. The Voyager crafts, launched in 1977, are currently only 12 billion miles away. At current velocities, it would take some 40,000 years for this tiny envoy to get to a different star system.

"What this project has shown me is that we can't really control the impression we make," said Orchard. "I think the fact of the satellite itself will do a lot of the talking. I would hope that the mere fact that we've endeavoured to send a record of humanity shows something about our humanity."