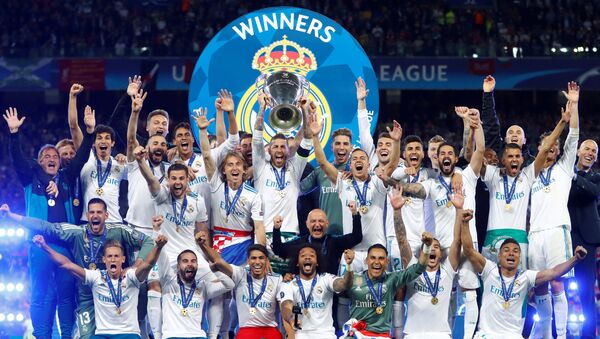 The incredible play of Gareth Bale, Ronaldo's numerous trophies and a serious injury of Liverpool player Mohamed Salah after a clash with Sergio Ramos became the main topics on Twitter after the eventful Champions League match.

Real Madrid managed to outmuscle Liverpool at Dynamo Stadium in Kiev, winning Champions League for the third time in a row and for the 13th time in total.

Liverpool put severe pressure on Real Madrid for the first 25 minutes, however, the game shifted to the Spanish club after Liverpool star Mohamed Salah clashed with Real's Sergio Ramos. The Egyptian player appeared to have badly injured his shoulder or collarbone and thus had to leave the field.

Yeah you can call him wolf in sheep’s clothing. That was the only plan Real Madrid had to win final. #UCLFinal #Liverpool #Mohamed_Salah #Salah pic.twitter.com/Pd2rDA3O44

Many football fans suggested that the move was intentional, expressing their discontent with the incident, also hoping that the player would recover soon in order to take part in the 2018 FIFA World Cup.

I don’t think that this is a coincidence pic.twitter.com/atK8zy528S

Real Madrid rejoiced, as Karim Benzema opened the scoring at the beginning of the 2nd period, but four minutes later Sadio Mane tied the game for Liverpool. Then Welsh player Gareth Bale, who stepped in only for the 2nd period, managed to bag a brace, including one lucky overhead kick, securing the victory for Real Madrid.

The match became a disaster for the Liverpool goalkeeper Loris Karrius, who apologized for his crucial mistakes to the fans right at the stadium.

There many posts were also made about the veteran player Cristiano Ronaldo, who didn't score a goal himself but set up a record, becoming UEFA champion for the 5th time.

Cristiano Ronaldo’s mom has the same number of Champions League of Barcelona.. 🏆🏆🏆🏆🏆 pic.twitter.com/s6CZRrGYFQ

After the match Twitter was flooded with comments from both sides — Liverpool and Real Madrid fans were eager to share their feelings. At least, some of them.

2018:
1. Prince from England gets married
2. Liverpool keeper saves the Pope

You've to feel for Liverpool 😳