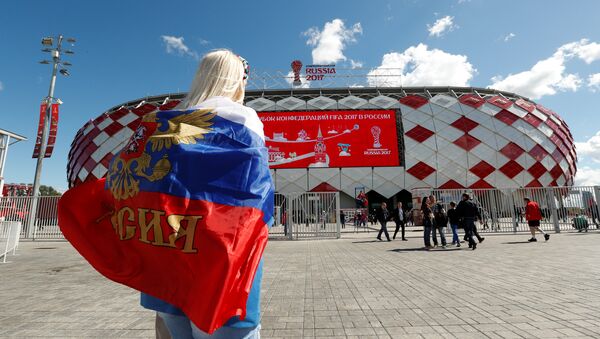 © REUTERS / John Sibley
Subscribe
MOSCOW (Sputnik) - The partnership between Russia and the European countries on the security at the 2017 FIFA Confederations Cup is an example of successful cooperation of border services, Deputy Director of the Russian Federal Security Service (FSB) Gen. Vladimir Kulishov told Sputnik.

"The experience of interaction shows that it is possible to effectively tackle cross-border crime only through joint work. Our partners also understand this, and they are trying to join efforts in countering transnational threats to border security. An example of successful cooperation with border agencies of the European countries was the ensuring of security at the 2017 FIFA Confederations Сup," Kulishov, who heads the agency's Border Service, said.

The Russian Border Service maintains data exchange with many European countries on potentially dangerous football fans, who may try to enter Russia for the upcoming FIFA World Cup, the official added.

"A risk profiling in passenger traffic at international routes for the identification of individuals possibly involved in the terrorist and extremist activities was established jointly with the German Federal Police. Data has been exchanged with the Norwegian police and the Finnish Border Guard concerning radical fans following through checkpoints," Kulishov added.

Russia will host the FIFA World Cup Finals from June 14 through July 15, 2018. The matches will be held in the cities of Moscow, St. Petersburg, Kazan, Yekaterinburg, Sochi, Rostov-on-Don, Kaliningrad, Samara, Saransk, Nizhny Novgorod and Volgograd.

On Friday, an advanced security measures were introduced in Russia ahead of FIFA World Cup Finals. The new measures include restrictions of access to controlled areas in and around championship’s facilities, including hotels and base camps where the players participating in the tournament will live.

Moreover, some roads will be closed in the host cities and increased safety measures will be introduced at public events not connected to the World Cup Finals.