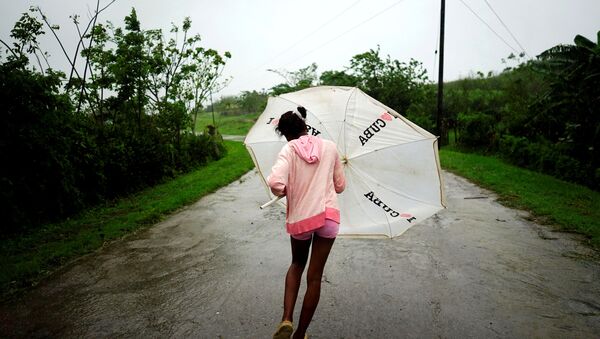 © REUTERS / Alexandre Meneghini
Subscribe
US National Weather Service (NWS ) on Sunday released warnings that people living along coastal regions in Florida, Alabama and Mississippi should “take this storm seriously,” as up to a foot of rain is expected to flood low lying areas alongside high winds over the popular holiday weekend.

States of emergency were declared in Florida, Alabama and Mississippi on Saturday as upwards of 15 inches of rain is forecast for the national Memorial Day weekend holiday.

Strong tidal surges and heavy winds are also predicted, according to US NWS statements.

"This is jogging more to the east and will hit the Florida panhandle," said NWS Weather Prediction Center's Patrick Burke, cited by Reuters.

"We're talking eight to 12 inches of rain this weekend, and storm surges on the Gulf Coast."

"It's heavy rainfall on the entire coast," he added.

On Sunday, some US states were recording winds of 50 mph and up to 10 inches of rain, according to National Oceanic and Atmospheric Administration's National Hurricane Center director Ken Graham.

"We need to really be careful with that rainfall," Graham added, noting that the storm was moving slowly at some 14 mph northwards.

The first named Atlantic storm of 2018, Alberto, which formed just days prior to the official beginning of the hurricane season, remains dangerous and will become stronger, gusting up to 65 mph on the Gulf Coast over the Monday holiday, according to the NWS, cited by Reuters.

"I ask everyone to please make final preparations to your family emergency plan, especially those that live in mobile homes and low-lying areas," said Mississippi Governor Phil Bryant.

The projected storm track for Alberto has shifted eastward, according to reports, lessening the threat to oil production facilities in the Gulf of Mexico, but increasing the danger to northeastern Florida coastal areas.