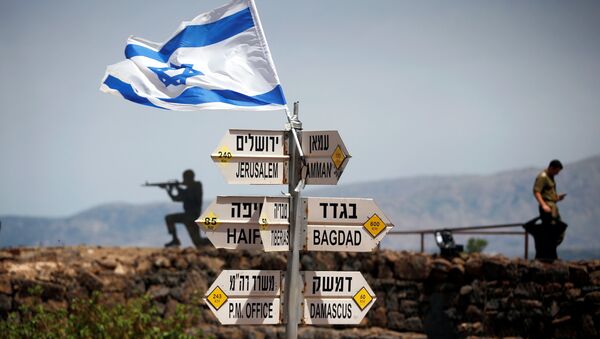 © REUTERS / Ronen Zvulun
Subscribe
In a letter to the US ambassador to Israel, as quoted by the Jerusalem Post, Knesset member Yoav Kish urged the US to officially recognize the Golan Heights as sovereign Israeli part. Sputnik discussed the possible international reaction if the US were to do so with Dr. Annie Waqar, Department of International Relations, University of Westminster.

Sputnik: How would Washington's allies react to the development?

Annie Waqar: I think it will be a sort of similar reaction that we have gotten from the Iran nuclear deal; even in the past EU, the Arab League, Germany, in particular, and also the United States of America during the Obama administration they had completely rejected that the Golan Heights belonged to Israel. So this is going to be quite an interesting step that perhaps Trump is going to take in terms of recognizing this as something that is legal and it will have a lot of repercussions, with regards to the other European counterparts.

The other nations have voiced, now and again, about this whole situation and how complex, at the moment, the Middle East looks. So there are going to be very sharp reactions, if it does happen.

The thing is, we are still seeing what will basically happen now that the United States has existed from the Iranian nuclear deal and we are still going to see how Europeans are going to be successful in terms of making this deal economically viable for Iran.

So it’s going to be quite a divided sense, if it does happen, but I think if this is something that eventually is recognized, then it will basically fail all the efforts that the previous Obama administration had taken with regards to covering sides and coming to terms with recognizing, you know, the territory that is the Israeli and Palestinian or holding any diplomatic talks. It is going to create a lot of chaos and obviously divided point of views coming from across the allies.

Sputnik: Israel is under a great scrutiny right now because of the Palestinian situation right now. Do you think we can expect to see more of a reaction in the future?

Annie Waqar: Well, that’s happening, with them recognizing the territory belonging to Israel. Yes, definitely. I mean without any doubt there’s a clear vision for the Syrian problem that it is, will remain a chaotic place where everyone is fighting everyone, neither Assad nor ISIS or Hezbollah is a sort of solution to the problem.

So if it does happen, it will obviously create a sort of very chaotic position in terms of how, not only it’s viewed from the point of view of US and its allies, but from the European point of view, because you will have this divide absolutely. But at the end of the day, even with this move of the embassy to Jerusalem, you did see that there were protests and obviously many people got killed.

This sense is perhaps something of the same effect that might happen but then eventually it does die down. But then there are some sparks some sort of repercussions; it does come again. It’s not that it will die down eventually, but somewhere or the other it will reappear, in some form.

I was actually discussing this with some of my other colleagues the other day and that’s exactly what we thought. As we see other deals coming into action, deals being sort of dismantled, you do have the sense that perhaps somewhere, the sparks do come back again. So the ripple effect, although you see that it stops somewhere, but it does go beyond.

The views and opinions expressed by Annie Waqar are those of the speaker and do not necessarily reflect those of Sputnik.

000000
Popular comments
Jerusalem is according to international law NOT the capital of Israel and the Golan is Syrian.