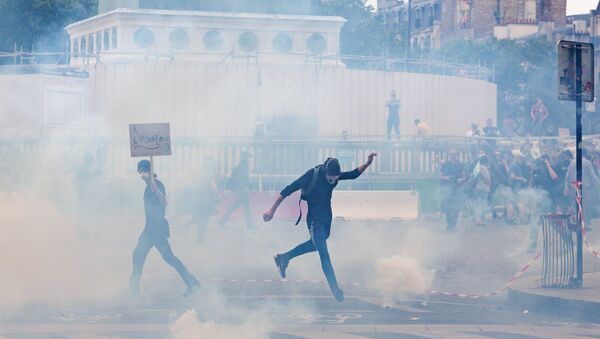 PARIS (Sputnik) - A group of people dressed in black began breaking shop windows and throwing sticks at police officers at the protest rally held in Paris on Saturday, a Sputnik correspondent reported.

The anti-government protest, which began at around 3 p.m. local time (13:00 GMT), was calm at first but turned violent after the group in black joined the demonstration.

Some people started painting graffiti on walls and windows of nearby buildings, while someone threw bottles at a woman who tried to film what was happening.

​The police had to use tear gas to subdue the violent protesters.

​Seven police officers were lightly injured as a result of the clashes with protesters wearing black, who attempted to take over a bank building, Interior Minister Gerard Collomb said.

"It is true that a group of Black Bloc radicals at one point attempted to take over a bank building. However, the law enforcement reacted extremely fast, within less than one minute," the minister said, as aired on the BFMTV broadcaster.

According to the broadcaster, at least 35 people were detained during the protests dubbed "flood of people."

The prefecture of the police in Paris estimates the number of participants at 21,000, while CGT trade union believes it to be around 80,000.

Rallies, organized by unions and left-wing parties, are taking place across France to protest against the policies of French President Emmanuel Macron.