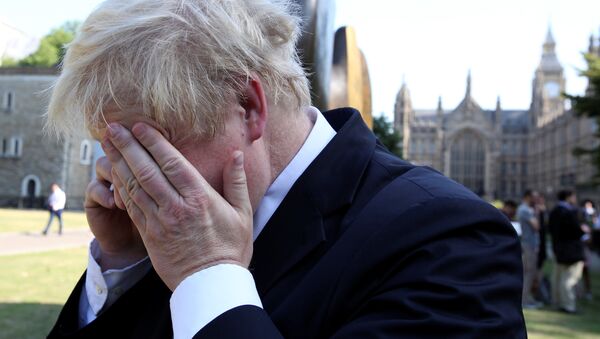 Jon Gaunt
All materials
I no longer believe one iota of the Skripal narrative Theresa May, Boris Johnson and the controlled MSM have been peddling these past few months.

The Boris hoax phone call with the "Armenian Prime Minister" was the final climax of this tragicomedy and if it doesn't lead to the end of his cabinet career the UK will truly be the laughing stock of the world.

Russia
Moscow Concerned Over Yulia Skripal's Treatment as Her 1st Interview Released
The wheel began to come off their propaganda pram when Yulia emerged walking through the grass looking like a 1970's shampoo advert. It actually made me think when are they going to start marketing Novichok as a cosmetic product, because let's face it, apart from the mark on the neck she looks better now than when she was poisoned?

As for her video "statement", I have seen terror hostages give a more convincing declaration at gunpoint than poor Yulia.

There is only one conclusion any sane viewer could come to wasn't there?  "It was the Russians wot done it and Putin's filthy fingerprints are all over this!!"

Well that's what the mainstream media would have you believe. They seem to have forgotten that the relationship between a journalist and a politician should be that of a dog and a lamppost! Our job is to probe, to investigate, to question and if necessary to piss all over the Politicians parade.

However, worryingly, the entire MSM are slavishly obeying the two D notices and treating them as if they are a blanket ban on any discussion of Salisbury which they are not.

Why is no one talking about Pablo and his connection to Sergei and the connection to the dossier created by Christopher Steele's company Orbis attacking Trump. There are many people who believe that Sergei was involved in this malicious attempt to discredit Trump. I do not know if any of this is correct but I do know the British Lame Stream Media is refusing to investigate it and one has to ask why? It sounds like a cracking story either way.

Why aren't the controlled media all over the hoax phone call story and the fact Boris the Buffoon actually told Russia's very own Dom Jolly, when asked about Britain's certainty that the Russian State was behind the Skripal's poisoning replied, "we're almost 100 per cent sure" before offering to share further evidence not in the public domain.

Ex-Spy Skripal's Mother Asks UK on Russian TV to Let Her Talk to Son
Take a breath for a minute and think about this statement. This is our Foreign Secretary saying this on a phone call to someone he has never met?!

Why is no mainstream media recalling the fact that Boris said in an interview with German TV when asked how he knew so quickly Russia was responsible he said "When I look at the evidence, the people from Porton Down, the laboratory, they were absolutely categorical."I asked the guy myself. I said: 'Are you sure?' And he said: 'There's no doubt.' So, we have very little alternative but to take the action that we have taken."

Why is no one in the Lame Stream media remembering that at the same time the Foreign Office tweeted "Analysis by world-leading experts at the Defence Science and Technology Laboratory at Porton Down made clear this was a military-grade Novichok nerve agent produced in Russia."

How about a journalist reminding the British public that this tweet was then deleted by the Foreign Office?

Then of course they could remind people that Diane Abbot accused Johnson of misleading the public over the Skripal case and the Russian involvement.

I must say at this point, I never thought that I would agree with "Abacus Abbot" but it's hard to argue with her assessment of Johnson when she said, "Boris Johnson is supposed to represent Britain on the world stage, but time and again he has shown he is unable to do so responsibly."

I know with "Abacus" this is a case of pot and kettle but facts remain the man is a clown but this is no laughing matter, as his words and actions have ratcheted up the tension with Russia and that is before we get on to the fake news story of the chemical attack in Syria and the subsequent bombing which poll after poll showed most Brits were against.

Viral
Twitter Brings Scar on Yulia Skripal's Neck Into Spotlight After First Interview
He is clearly not fit for purpose and he must be sacked but of course he won't be, as May is implicated in all of this nonsense, she is in it up to her scrawny neck.

Just a couple of questions; how the hell did these two Russian pranksters get the Foreign Secretary's number and actually get through to him? Where were the spooks? It is really ironic that the Sun are running a PR puff story for the secret service saying they have been inundated with people wanting to join them after the Salisbury poisiong story. The Sun describe these people as patriots, I would describe them as clowns who want to join the circus.

But don't worry though, as the MSM, in the shape of the Times, want to get on to safer ground, which of course is to blame those pesky Russkies, whilst keeping the real story or truth off the front pages.

In today's edition they attack the Kremlin for the hoax call and quote the following,  "A senior diplomatic source called the prank "the latest desperate attempt by the Kremlin to save face after it was internationally shamed in the wake of the Skripal attack. Boris rumbled them pretty quickly (it actually took a full 18 minutes!) and ended the call. It is tragic to see an international power reduced to failed pranks you would usually only find on Trigger Happy TV."

That's an ironic quote isn't it? To accuse another State of pranks after the ridiculous stories our government have spun about: the poison being in the suitcase the air conditioning, on a pizza, in his porridge or on the door handle? All of which do not stand up to any real scrutiny but have been mopped up by our controlled media.

Then the actual term, "trigger happy" is in rather bad taste as I would suggest that it is Boris who was trigger happy along with May who declared almost immediately that this was military grade novichok, made in Moscow and directly linked to Putin.

I would also suggest that they were "trigger happy" when they expelled the diplomats kicking off tit for tat retaliation from Moscow.

Looking at the polls it also appears that most Brits also believe that our Glorious Leaders were "trigger happy" when they bombed Syria before they validated the chemical gas story.

All of this, of course is being discussed openly on the internet and social media and people are becoming very cynical and sceptical about the explanations of our Government but where's the investigations and questions in the newspapers and on mainstream TV?

Then they wonder why newspapers are dying and why TV news audiences are declining whilst they still brag about Britain's Free press and the quality of the journalism and independence of the BBC?

Hey but ignore me I am just a tin foil hat wearing conspiracy theorist and a Russian Bot!