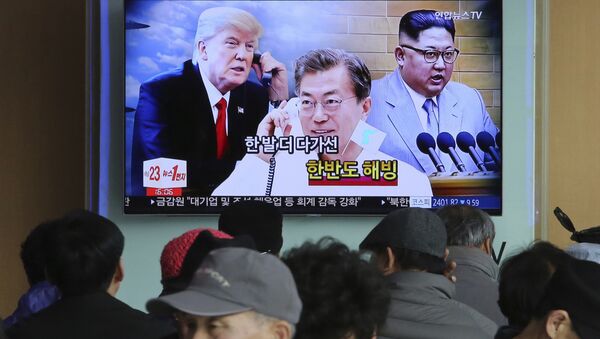 Earlier this week, Pence in an interview with FOX News warned North Korea that the "military option" was still on the table and suggested that the United States might have to implement the "Libya model" of regime change, hinting at the bloody overthrow of former Libyan President Muammar Gaddafi. Korean deputy foreign minister Choe Son-hui told KCNA that Pence’s remarks were "unbridled and imprudent." The minister warned that Pyongyang would reconsider holding the talks on June 12 if the United States continued unlawful and outrageous acts.

"Sadly, based on the tremendous anger and open hostility displayed in your most recent statement, I feel it is inappropriate, at this time, to have this long-planned meeting," Trump said in a letter on Thursday to Kim released by the White House. "Therefore, please let this letter serve to represent that the Singapore summit, for the good of both parties, but to the detriment of the world, will not take place."

Trump added that his decision is a setback for North Korea and for the world. The president placed the fault on the rhetoric emanating from Pyongyang.

A senior US administration official said in a conference call on Thursday that the United States made many attempts to communicate with the North Korean government, but they have not responded.

North Korea: Trump's Decision to Cancel Summit Not What World Wants
The official added that the North Koreans never showed up to Singapore last week to meet with a US delegation in preparation for the Trump-Kim Summit.

North Korea led a trail of broken promises when it did not allow international experts at the closing of one of its nuclear test sites on Thursday and when Pyongyang cancelled a ministerial meeting with South Korea, the official noted.

Pyongyang had decided to cancel ministerial level talks with Seoul in response to recent joint military exercises held by the US and South Korea. The next day, North Korean First Deputy Foreign Minister Kim Kye-gwan said North Korea might cancel the summit between Kim and Trump if Washington continues its hostile policy.

US Secretary of State Mike Pompeo said on Thursday that the United States will most likely impose new sanctions on North Korea and will encourage other countries to do the same.

"I am sure there will be additional sanctions that we will seek to put in place, the United States, I am sure we'll go back to others asking them to do more as well," Pompeo told the US Senate Foreign Relations Committee.

Scholars Explain What May Be Behind Trump's Decision to Cancel Summit With Kim
The United States will continue to expect the full dismantlement of North Korea’s nuclear systems despite the canceled meeting.

On Thursday, North Korea's Defense Ministry blew up three tests mines at the Punggye-Ri nuclear test site, in addition to also destroying security checkpoints and other facilities, a Sputnik correspondent reported at the scene.

The Nuclear Weapons Institute Deputy Chair Kang Kyung-ho told Sputnik that North Korea had no other sites or mines for underground nuclear tests left following the dismantling of the Punggye-Ri complex, pointing out that the resumption of nuclear tests at the site would be impossible.

However, a senior US administration official said the United States is unable to verify whether North Korea actually destroyed its Punggye-Ri nuclear test site because of the absence of international experts.

The official added that it is possible that the tunnels of the Punggye-Ri test site were detonated in a way that will still allow them to be used in the future.

Seoul Regrets Pyongyang's Decision to Suspend High Level Inter-Korean Talks
The military option is back on the table as diplomatic efforts dwindle. Trump has underscored that the US military is ready to take action against North Korea if necessary.

US House of Representatives Speaker Paul Ryan said in a statement on Thursday that the United States must continue to work with allies to find a peaceful resolution to the situation in North Korea after Trump decided to cancel his upcoming summit with Kim.

"The North Korean regime has long given ample reason to question its commitment to stability. We must continue to work with our allies toward a peaceful resolution, but that will require a much greater degree of seriousness from the Kim regime," Ryan said.

Ryan added that the United States needs to maintain its maximum pressure campaign against North Korea through tools provided to the Trump administration by Congress.

Senator Cory Gardner in a press release on Thursday called on the United States to impose a complete economic embargo on North Korea and to maintain sanctions in place until the Pyongyang is ready to pursue denuclearization in good faith.

"It’s time to pass my bipartisan legislation, the LEED Act, because it will increase the pressure on Kim Jong-un by implementing a full economic embargo and targeting his regime’s enablers," the release said.

"I urge both parties to continue their dialogue to find a path to the peaceful and verifiable denuclearisation of the Korean peninsula," Guterres was quoted as saying by the UN press service.

Moon said the mission to denuclearize the Korean Peninsula must not be abandoned or postponed.

Moscow is not surprised by Trump’s cancellation of the meeting with Kim, Russia's Permanent Representative to the EU Vladimir Chizhov said Thursday.

"If you think I was surprised — no. This was about to happen," Chizhov told reporters on the sidelines of the St. Petersburg International Economic Forum (SPIEF).

Trump Calls Off June 12 Meeting With Kim Jong-un, Hopes to Meet Him 'Some Day'
Russian President Vladimir Putin said that Moscow regrets the cancellation of the summit between the United States and North Korea. He added that he hopes the summit would still take place.

French President Emmanuel Macron said the peace process to reduce tensions on the Korean Peninsula should continue despite the cancellation of the US-North Korean summit.

"The process that has already been launched, aimed at reducing tensions on the [Korean] Peninsula, as well as the process of de-nuclearization and disarmament of the entire peninsula — this process should continue," Macron told a press conference after talks with Putin.

000000
Popular comments
existential threats made by Vice President Mike Pence. - diplomacy is not an inherent skill with the politicos in dc. Nor is it something that they can be trained in.
michael
25 May 2018, 04:52 GMT3
000000
the military option was never off the table as far as the US regime is concerned. This was only empty rhetoric from the US as we are used for decades. Only a total naive person who slept the last 40 years would have expected a positive result
kooka
25 May 2018, 08:15 GMT1
000000
Newsfeed
0
New firstOld first
loader
LIVE
Заголовок открываемого материала
Access to the chat has been blocked for violating the rules . You will be able to participate again through:∞. If you do not agree with the blocking, please use the feedback form
The discussion is closed. You can participate in the discussion within 24 hours after the publication of the article.
To participate in the discussion
log in or register
loader
Chats
Заголовок открываемого материала
Worldwide
InternationalEnglishEnglishMundoEspañolSpanish
Europe
DeutschlandDeutschGermanFranceFrançaisFrenchΕλλάδαΕλληνικάGreekItaliaItalianoItalianČeská republikaČeštinaCzechPolskaPolskiPolishСрбиjаСрпскиSerbianLatvijaLatviešuLatvianLietuvaLietuviųLithuanianMoldovaMoldoveneascăMoldavianБеларусьБеларускiBelarusian
Transcaucasia
ԱրմենիաՀայերենArmenianАҧсныАҧсышәалаAbkhazХуссар ИрыстонИронауОssetianსაქართველოქართულიGeorgianAzərbaycanАzərbaycancaAzerbaijani
Middle East
Sputnik عربيArabicArabicTürkiyeTürkçeTurkishSputnik ایرانPersianPersianSputnik افغانستانDariDari
Central Asia
ҚазақстанҚазақ тіліKazakhКыргызстанКыргызчаKyrgyzOʻzbekistonЎзбекчаUzbekТоҷикистонТоҷикӣTajik
East & Southeast Asia
Việt NamTiếng ViệtVietnamese日本日本語Japanese俄罗斯卫星通讯社中文（简体）Chinese (simplified)俄罗斯卫星通讯社中文（繁体）Chinese (traditional)
South America
BrasilPortuguêsPortuguese
NewsfeedBreaking
13:08 GMTNuclear Power, Food and Other Industries Affected by UK CO2 Shortage, Which is Spilling into Europe
13:08 GMTZelenskyy's Aide Shefir Says Assassination Attempt on Him Aimed at Intimidating Government
12:58 GMTMerkel, Kramp-Karrenbauer Pay Tribute to German Soldiers Who Participated in Afghanistan Evacuation
12:48 GMTPakistan to Keep Sending Aid to Afghanistan, Focus on Humanitarian Mission, Ambassador Says
12:45 GMTGerman Energy Ministry Believes Russia Fulfilling Gas Supplies Obligations
12:25 GMTOne Cable to Rule Them All: EU to Demand Use of Common Charger for Smartphones by 2024
12:19 GMTEcoHealth Alliance, DARPA Toyed With Infecting Wild Chinese Bats With Covid, Leaked Docs Allege
12:17 GMTCristiano Ronaldo's Return to Manchester United Makes Him World's Highest-Paid Footballer
12:11 GMTUS House Passes Bill Compensating 'Victims' of Enigmatic 'Havana Syndrome'
12:07 GMTMacron, Biden to Hold Talks on Wednesday to Clarify Details of Australia's Decision on Submarines
11:57 GMTSudanese Authorities Lack Mandate to Sign Naval Base Agreement With Russia, Minister Says
11:44 GMTCanada Unlikely to See Another Snap Vote After Trudeau's Failed Bid to Win Majority
11:26 GMTBiblical Story of Sodom Likely Inspired by 'Cosmic Airburst' Bigger Than Tunguska Blast, Study Says
11:10 GMTUS 'Era of War Over'?
11:07 GMTPandemic Times: India's Healthcare Adopts Cloud Computing, 12 Mln Consultations Clocked
10:55 GMTAll Participants of Sudan Coup Detained, Will Stand Trial, Deputy Foreign Minister Says
10:51 GMTDonald Trump Sues NYT, Niece Mary Over ‘Insidious Plot’ Behind 2018 ‘Dubious Tax Schemes’ Story
10:48 GMTDriver of Zelensky's Aide Shefir Undergoing Leg Surgery, Report Says
10:34 GMTKremlin Regrets Erdogan's Claims About Crimea's 'Annexation' on Eve of Sochi Summit
10:18 GMTThe Truckers' Friend: UK Transport Secretary Takes Action to Protect M25 Motorway From Demonstrators