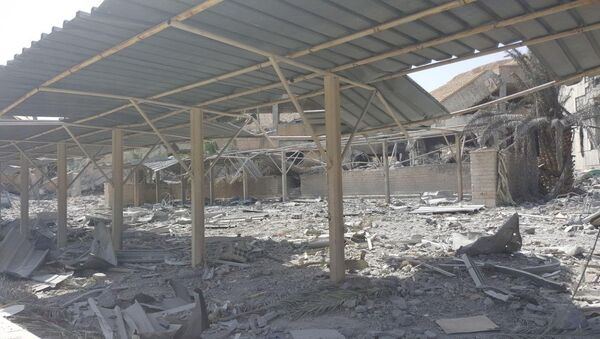 © Sputnik / Mohammad Maarouf
Subscribe
Syria may need more than previously estimated $400 billion for its reconstruction efforts, and is expecting to cover cost with the help of internal sources and foreign aid, including from Russia, Syrian Minister of Economy and Foreign Trade Samer Khalil told Sputnik on Friday on the sidelines of the St. Petersburg International Economic Forum.

"To rebuild Syria… the external funding is needed as well as internal… $400 billion is not the final estimate. We are speaking about several financing vectors," the minister said.

According to Khalil, some of the funding would be provided by the Syrian government and businesses, while the rest would come from foreign aid, mostly from Russia.

"As for the technical support [for rebuilding efforts], our companies have the required experience, but we also hope for help and support of friendly countries, with Russia at the forefront of this list. Russia is already providing this technical support," the minister said.

Two weeks ago, Syrian President Bashar Assad estimated that it may take up to $400 billion to reconstruct Syria after the conflict, but noted that the precise number was unknown since some areas were still controlled by terrorists.

Russian companies have already proceeded with reconstructing the Syrian oil and gas industry, in particular, by rehabilitating the damaged deposits and discovering new ones, Syria’s Minister of Economy and Foreign Trade Samer Khalil said.

"Our work with Russian companies in this area is developing in two directions. The first is the development of oil and gas industry through discoveries of new deposits, and the second is the rehabilitation of damaged deposits. Russian companies have already begun working on this," Khalil said.

Russian Air Defenses Intercept Projectile Targeting Hmeymim Base in Syria
He added that Syria was trying to increase the number of existing agreements with Russian companies, attracting more of them to the Syrian market.

The Syrian people have enough will and determination to make the plans of their president, Bashar Assad, to completely restore Syria within 10-15 years achievable, Samer Khalil said.

"As for the time frame of 10-15 years, which our President [Bashar Assad] mentioned, the Syrian people have enough will and drive to rebuild the country, and this drive is now only getting stronger," the minister said.

Syria has been engulfed in a civil war since 2011, with government forces fighting numerous opposition factions and terrorist groups. Moscow has been assisting Damascus both by supporting the struggle against the terrorist groups and assisting the country in the post-war reconstruction.

The SPIEF, held annually in Russia's second largest city of St. Petersburg, is a major networking hub for entrepreneurs and a global platform for the discussion of crucial economic issues. The event began on Thursday and will continue through Saturday. Rossiya Segodnya International Information Agency is the official media partner of the forum.