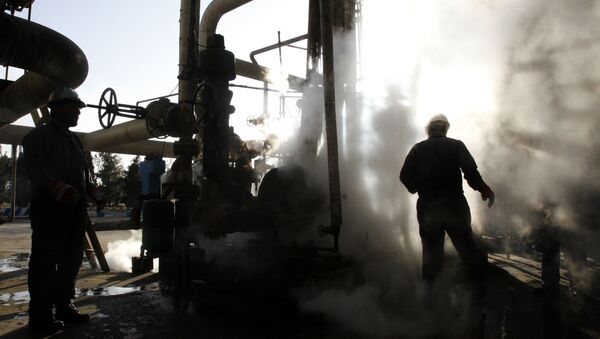 ST. PETERSBURG (Sputnik) - The EU attempts to continue investments in Iran despite the US decision to re-impose sanctions on the Islamic Republic are impossible for energy giants as they need access to the US banking system, Total President and CEO Patrick Pouyanne said Friday during an Energy session of the SPIEF.

"I cannot run a global company like Total without having access to the US banking system or US investors, that’s a matter of fact. The world economy today is organized around the currency which is a dollar. It’s not my job to decide if we need another financial system, it’s not the case today, so we have to be pragmatic. Unfortunately, I don’t think so, maybe it could work for smaller companies, less global ones, which I think is the objective of European governments, but for the large companies… it’s not possible," Pouyanne said, asked if he would accept the European Union’s potential leeway to continue investments in Iran.

At the same time, Pouyanne asked Russian President Vladimir Putin to allow its venture, established jointly with Russia’s Novatek, to supply gas to Europe via the pipeline system connecting Russia and the European Union.

“I would like to propose to President Putin to carry out a courageous reform. Can we hope that someday in the future you will allow our joint venture, set up by Novatek and Total, to supply our gas to Europe through these pipelines? This will further stabilize the position of Russian gas on the European market. And, of course, this is very important for these gas pipelines,” Pouyanne said at the St. Petersburg International Economic Forum (SPIEF).

On May 8, US President Donald Trump announced his decision to withdraw from the Joint Comprehensive Plan of Action (JCPOA), which requires Tehran to maintain a peaceful nuclear program in exchange for sanctions relief. Trump also announced that he would re-impose US sanctions on the country. The US Treasury has already imposed restrictions on some Iranian individuals and entities. The decision was not supported by other parties to the JCPOA.

Following the US decision, European Commission President Jean-Claude Juncker announced that the union would amend its Blocking Statute in order to include the US sanction imposed against Iran in the regulation. As soon as the amendments are adopted, EU businesses will be allowed not to comply with the US restrictions or even demand compensation for losses caused by the US sanctions.

OPEC-Non-OPEC Meeting in June to Address Figures for Oil Output Increase – Novak
Iran also expressed an idea to establish a bank to settle EU transactions in euros to avoid US measures in the wake of Washington’s exit from the nuclear deal.

The St. Petersburg International Economic Forum (SPIEF), held annually in Russia's second largest city of St. Petersburg, is a major global platform for communication between business representatives and the discussion of crucial economic issues. The event started earlier in the day and will continue through Saturday.