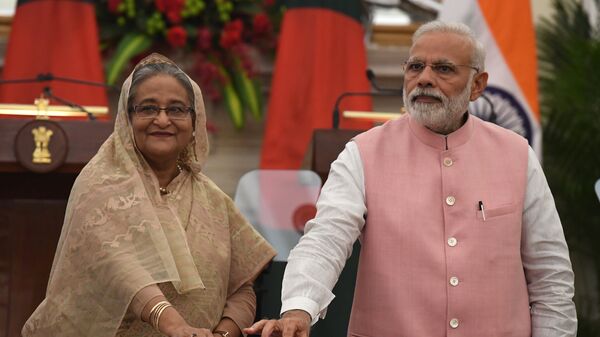 New Delhi (Sputnik) — Bangladeshi Prime Minister Sheikh Hasina has urged India and other countries to mount pressure on Myanmar to take back over a million Rohingya Muslims who have sought shelter in her country to escape a military offensive. Hasina says Bangladesh gave shelter to the fleeing Rohingyas on humanitarian grounds, but they should return to Myanmar.

"There are 11 lakh (1.1 million) Rohingya refugees in Bangladesh. We have given them shelter due to humanitarian consideration; we want them to go back to their land. We cannot help offering shelter to oppressed people. We appeal to all to keep up pressure on the government of Myanmar to take them back," Sheikh Hasina said in the presence of her Indian counterpart, Narendra Modi, in the Indian port city of Kolkata on Friday.

Bangladesh PM Sheikh Hasina said India should play an important role in ensuring safe repatriation of the Rohingya refugees back to Myanmar.

Asia
Amnesty Report on Massacre of Hindus by Rohingyas Triggers Outrage in India
Myanmar and Bangladesh signed an agreement last November for the repatriation of Rohingya refugees. Since then, two meetings of the Joint Working Group (JWG) have been held to accelerate the repatriation process. The second meeting of the group was held last week wherein a plan for the physical repatriation of forcibly displaced Myanmar nationals living in Cox's Bazar, Bangladesh, was discussed with priority.