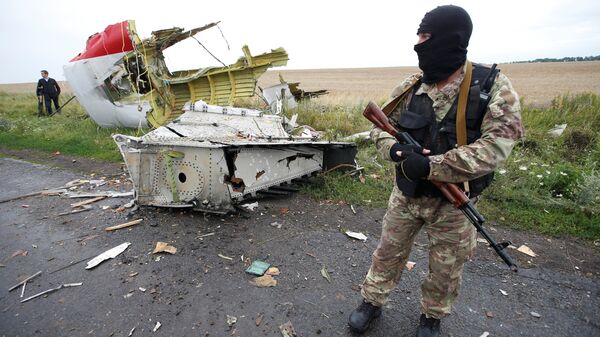 © REUTERS / Maxim Zmeyev
Subscribe
After years of investigations, the Joint Investigation Team have said the missile that brought down the MH17 plane in 2014 came from the city of Kursk, where they say Russian military is based.

They have claimed they've uncovered hard evidence that the missile system that had shot down MH17 over East Ukraine in 2014 was part of the Russian military. Investigator Wilbert Paulissen said that after studying all available photos and footage, investigators had been able to trace down the launched by the Buk TELAR belonging to the Russian Armed Forces in Kursk. Sputnik spoke to Adam Garrie Director of Eurasia Future for more insight into the issue.

Sputnik: What do you make of the findings in to the downing of MH17?

Adam Garrie: I made nothing of them because the Dutch simply say they have this evidence, they won’t show it and evidence that one has and doesn’t show, one can’t make the assumption that it exists.

It seems to me to be a clear provocation. Just days after a very healthy Yulia Skripal emerged from whatever she was getting Into. It also comes at a time, when the United States is well aware that the European Union will need to do something in terms of relaxing sanctions with Russia if they are indeed serious about cooperating with the other members of the JCPOA to preserve the Iran deal. If Europea actually means what it says and wants to preserve the JCPOA, it will have to play nice with Russia and open the markets of Europe to China

Sputnik: How impartial could these results be bearing in mind 3 and a half years ago a group of amateurs alleged the same conclusion they’ve released today?

Adam Garrie: Indeed at least the amateurs were able to show were able to show poor mobile phone footage of Russia moving missiles around in South Ossetia from the war that took place a decade ago and claim it was in Donbass.

The whole issue has been handled terribly poorly by the Dutch, by Europe as a whole and by Russia because they are forgetting a legal concept and a very well defined one, which would imply that the Ukrainian regime may not have necessarily been responsible for the direct downing of the plane, they do bear a legal responsibility.

Donbass was and when the plane was shot down a war zone and it was a known war zone, where missiles were operating, entirely capable of shooting down a commercial jet from the sky. Therefore it was the responsibly of whoever controls the air traffic in the region to reroute planes from the Donbass war zone.

Sputnik: Due to the fact that this plane came down in a conflict zone, does that not complicate the legality and thoroughness of any investigation?

Adam Garrie: It’s very difficult to conduct such investigations in a war zone especially when the primary dispute is over territorial sovereignty, obviously that complicated things even though the Donbass Republics have been entirely cooperative.

But it seems that the cooperation that the Donetsk has given to the international community isn’t appreciated in all corridors and that’s complicated things from the very beginning.

The views and opinions expressed by Adam Garrie are those of the speaker and do not necessarily reflect those of Sputnik.