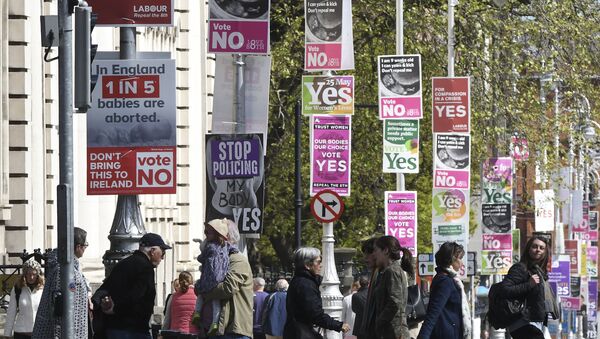 © AFP 2022 / Artur Widak
Subscribe
Irish voters from around the world are returning to cast their ballots in Friday's referendum on whether or not to repeal the country's Eighth Amendment. The clause in the Irish constitution in effect outlaws abortion by giving equal rights to the unborn.

People on both sides of the argument are travelling back to vote, but the movement has been spearheaded by the London-Irish Abortion Rights Campaign a prochoice group that believes some 40,000 people who recently left Ireland could be eligible to vote. Sputnik spoke to Diarmaid Ferriter, Professor of Modern History at University College Dublin for more insight into the issue.

Sputnik: How close is the vote with just a few hours till polls open?

Diarmaid Ferriter: It’s looking very close; a lot of people think it will go down to the wire.

There have been a number of polls over the last couple of weeks that indicate the yes side has a lead. But there are a lot of people still undecided and the last opinion poll had tat at 17%, so what way they vote and whether they vote will obviously have a huge influence on the final result. I think because of the nature of the subject there’s a bit of scepticism about the polls and if people being entirely frank with the pollsters. So it’s quite hard to read in that sense and anyone who says they know what the outcome is, is lying.

Sputnik: How divisive is this issue becoming?

Diarmaid Ferriter: There has been over the last couple of weeks, as we get closer to polling day, there have been some emotive and absolutist interventions in the debate. It’s always been an emotive issue, but I don’t think this campaign is as poisonous and as bitter as it was in 1983, when the original amendment was inserted into the constitution which was also a cause of a referendum in 1983.

Obviously a awful lot has changed in the meantime, there has been a considerable broadening in the parameters of the discourse of the debate about this subject.

Sputnik: how does this year’s referendum differ to the 1983 referendum when it came into the constitution?

Diarmaid Ferriter: I’ve looked at 1983 very closely as a historian and what struck me about that debate was the absence of the voices of women and women who have had crisis pregnancies and difficult pregnancies. A lot of the debate in 1983 was quite legalistic and moralistic and quite abstract.

This question of assigning equal right to life of the mother and the unborn, in 1983 that wording was promoted by those in favour of the amendment. But it’s proved in practice to be very complex and not conjunctive to the proper handling many would argue of crisis pregnancies. I think what’s changed is the extent to which people are now discussing abortion, not just as a moral or a religious issue. But as a health issue, as a feminist issue, as an issue that is directly relevant to women’s experiences and those voices need to be heard.

The views and opinions expressed by Diarmaid Ferriter are those of the speaker and do not necessarily reflect those of Sputnik.