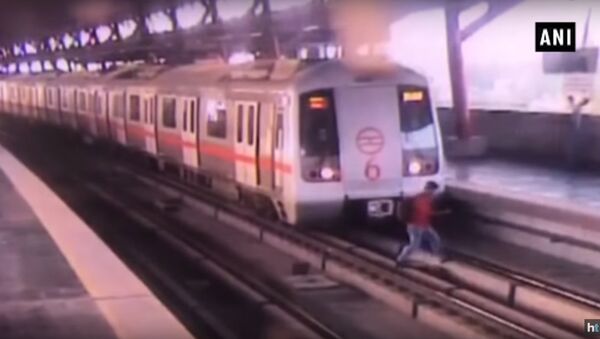 The viral video with a nail-biting ending shows a Delhi man crossing over the metro train tracks and attempting a failed bid to climb up on the platform. He could have been razed to dirt had not the metro driver brought the train to a screeching halt just in the nick of time.

New Delhi (Sputnik) — A chilling video of a man almost being run over by a metro train in the Indian capital Delhi has caught the attention of social media users who have been incessantly sharing the video with comments praising the train's driver for his alertness that averted a major tragedy.

In the video, the person, identified as Mayur Patel, 21, is seen jumping onto the tracks and moving towards the adjoining platform as soon as a halted train starts moving. As he tries to climb up on the platform, he falters and almost gets banged against the train that halts just in time.

When questioned by metro security, Patel said he did not know how to cross over to the other platform and hence decided to walk on the tracks. He has been fined for the bizarre and dangerous action.

As per Indian laws, walking on metro tracks without permission from relevant authorities is illegal. It can attract a jail term of up to six months or a fine of INR 500 (approximately $8) or both.

Delhi Metro, which began its operation in 2002, is still in an expansion mode and ferries around 2.7 million commuters every day in the National Capital Region. The tracks of the Delhi metro run through a combination of both underground as well as elevated corridors.