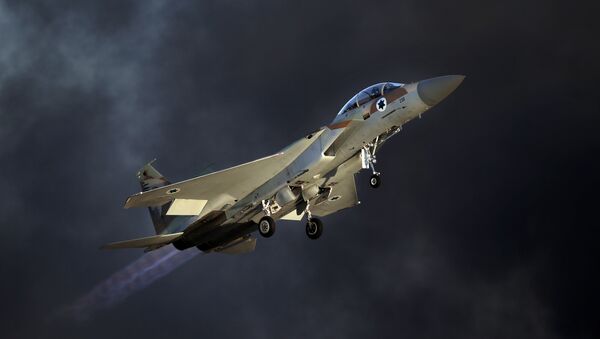 A senior Israeli Air Force officer has said that his country's military aircraft will continue to operate in Syrian airspace for as long as is deemed necessary.

"We're not doing this because we're aggressive, but because we constantly have to be actively defending the state of Israel," the senior officer said, speaking to reporters on condition of anonymity on Wednesday.

"This is the only thing preventing offensive measures by Iran," he added.

Israeli Airstrikes on Alleged Iranian Targets in Syria Is Aggression - Envoy
On Tuesday, the commander of the Israeli Air Force declared that Israel had become the first country in the world to use its US-made F-35 fifth-gen stealth fighter in combat. "We are flying the F-35 all over the Middle East and have already attacked twice on two different fronts," Maj. Gen. Amikam Norkin was quoted as saying by Israeli media.

Syrian-Israeli relations were brought to a boiling point earlier this month after the Israeli Air Force hit what it said were Iranian targets in Syria, following an alleged rocket attack against Israeli military positions in the occupied Golan Heights. Earlier this year, Israeli jets repeatedly struck Syria's T-4 air base, which Tel Aviv claimed contained "Iranian bases in Syria."

On Wednesday, Syrian Deputy Foreign Minister Faisal Mikdad told Sputnik that the possibility of withdrawing Iranian military advisers and Hezbollah militia was "not even on the agenda of discussion, since it concerns the sovereignty of Syria."

The Israeli Air Force has regularly violated Syrian airspace throughout the course of the Syrian civil war. Damascus has called these incursions acts of aggression and vowed to continue to "repel any aggression against Syria, regardless where it will take place."