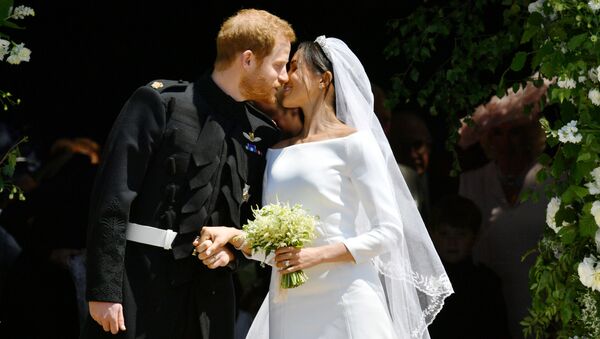 © REUTERS / Ben Birchall
Subscribe
An apparent attempt to cash in on hype over the royal wedding has landed a German producer of sweets Super Dickmann in hot water, as the firm has had to apologize for a collage of its brand’s chocolate-covered marshmallows in a bridal dress.

Super Dickmann, which has made a name for itself around the world with its chocolate covered marshmallows, has called the company’s tribute to Meghan Markle, who over the weekend married British Prince Harry, "stupid and embarrassing." The company’s spokesman Bernd Roessler has explained the reason for the mishap, as cited by the Deutsche Welle outlet, as “lack of thought, put into the decision.“

To celebrate the wedding of a British royal marrying a biracial US actress, which mesmerized millions of viewers around the world with its Cinderella story, Super Dickmann’s social media manager posted a picture of their sweets, dubbed “chocolate kiss,” in a bride’s dress in a cathedral on their Facebook account. The image on the page, impersonating a marshmallow itself, was titled with a reference to the candy’s filling “foam in white" and was accompanied by a message “Wouldn't you also want to be Meghan today?"

​This didn’t find much understanding among social media users, who slammed Super Dickmann for racism and insensitivity. An apology from Super Dickmann later appeared in the comment section, saying it was sorry the image had conjured such associations.

“The world of Super Dickmann is bright and diverse far from any racist thoughts,” it read. The post itself was later deleted as the announcement promised.

The company, whose slogan incidentally can be translated from German as “So Super Dickmann is no one,” has a history of racial controversy. According to DW, for many years Germans called these sweets "Negro kiss", this name is still used by older generations.

Meghan Markle’s African-American ancestry became the focal point of several racial controversies during wedding preparations and after the ceremony. The German public broadcaster ZDF found itself mired in scandal as journalists and social media condemned the broadcaster’s commentators for the describing the bride and her guests as "exotic" as well as bringing up black hair with a connotation some found inappropriate.