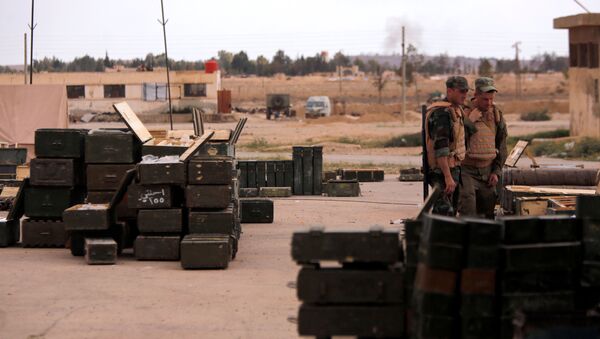 Syrian government forces have repeatedly reported of finding caches with militants' weapons produced in NATO member-states, as well as Israel.

Chlorine was also uncovered in the depot, located in Syria's western province of Homs.

While the information is yet to be confirmed, the US along with some of its EU allies, have been supporting the so-called "moderate Syrian opposition" since the beginning of a civil war in Syria in 2011.

Western states have only been supplying arms to the Syrian "rebels," yet the weaponry was then found in the hands of Daesh* and al-Nusra Front* militants, according to media reports and Pentagon officials.

*Daesh (ISIL/ISIS/Islami State) and al-Nusra Front are terrorist groups, outlawed in Russia and an array of other countries.