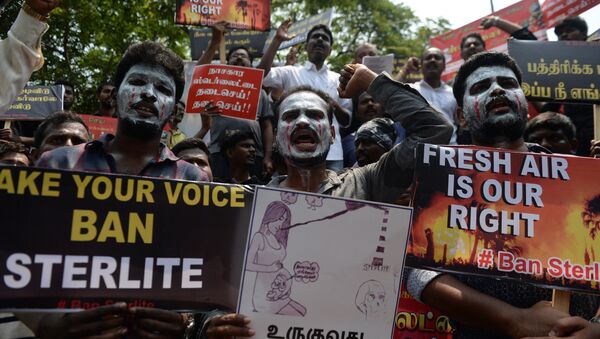 © AFP 2021 / ARUN SANKAR
Subscribe
Activists have been opposing the plant for over two decades, claiming that poisonous gases emanating from the smelters have caused cancer among the locals. They later found support from villagers who sprung into action in February this year with Vedanta announcing the expansion of its copper smelter.

New Delhi (Sputnik) — Ten persons have been killed and hundreds of others injured in a massive clash between demonstrators and the police as a protest against a copper plant in the southern Indian state of Tamil Nadu entered its 100th day on Tuesday.

Thousands of protestors demanding the shutting down of the Sterlite Copper Plant — a subsidiary of Vedanta — a leading global natural resources company, torched vehicles, including those of the police. The protestors are mainly locals of the Thoothukudi district who have been demanding for years now that the copper plant be shut down on account of a tremendous amount of poisonous gas polluting the area's land and water.

"There are a lot of environmental dangers as well as health dangers, particularly cancer. Almost every house is affected by cancer. Children are most affected. Throat cancer has increased. Eye cancer has also gone up. All this is strange and shocking. We have taken the decision that this district can no longer tolerate this. We have entered the field," said Fathima Babu of the Anti Killer Sterlite People's Movement, as cited by the local media.

Major clash between protesters and police at Thuthukudi during 100th day of 'Protest against Sterlite'. Stone pelting, tear gas and lathi charge!! pic.twitter.com/RK42sx2xQd

Following the clashes, the assembly of more than five persons, rallies, public meetings, processions and the exhibition of weapons and flags have been banned in the Thoothukudi district.

"This seems like an effort by the police to stop protests against Sterlite. Discussions are required in this matter. People have carried out a huge revolution but police have turned it violent. They have even shot people and this is regrettable. I condemn the actions of the police," MK Stalin, the leader of the opposition in the Tamil Nadu state assembly and working president of the DMK party, wrote on Twitter.

Local activists have claimed that copper smelters release sulfur dioxide and dust particles into the air, apart from exploiting a lot of surface water and resources, which should instead be used for agriculture.