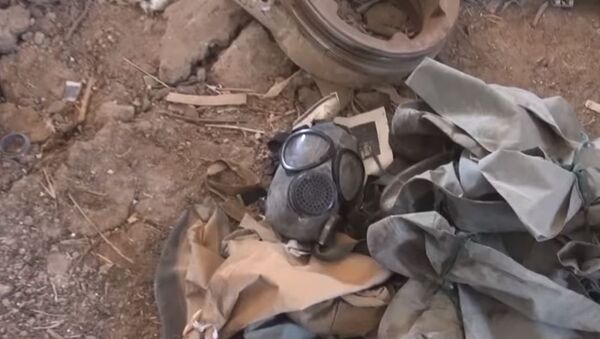 The discovery of gear meant for protection against chemical weapons was part of a vast stock of NATO weapons found Monday by the Syrian military and members of the Russian Center for Syrian Reconciliation in territory recently freed from militants.

Commenting on Monday's weapons discovery, which included gas masks and other equipment, in addition to heavy weapons, retired Lebanese Brigadier General Amin Hteit warned that the chemical protection equipment pointed to a possible preparation for another false-flag attack involving the use of chemical weapons.

"The warehouse find includes a great deal of equipment associated with chemical attacks," the former officer said, speaking to Sputnik.

"This means that an incident involving a chemical attack was prepared by NATO countries, with the militants given everything they needed to accomplish it. NATO countries, first and foremost the United States, organize such provocations to allow them to further blame the Syrian government," Hteit added.

Explosives, weapons and equipment found in Homs after clearing the area pic.twitter.com/XeDLgTBJd1

Hteit stressed that apart from the chemical protection equipment, the Homs find was "another piece of evidence" regarding the "NATO countries' supply of weapons to the terrorists."

"The American and French [armies] are illegally based on Syrian territory. NATO was founded as a defensive bloc, but has now turned into an aggressor organization," the ex-officer noted.

Russian Military Finds Syrian Militants' Depots With NATO Weapons
On Monday, a Russian Center for Syrian Reconciliation representative, Andrei Nekipelov, reported the discovery of a large cache of weapons and equipment, including US-made Tow-2 anti-tank missiles, machine guns, explosives, gas masks and other gear in the settlement of al-Zaafaraniyah in western province of Homs.

Prior to the latest weapons find, Syrian government troops had repeatedly reported finding large quantities of NATO and Israeli-made weaponry in territories cleared of Islamist militants, including Daesh* (ISIS). NATO and Tel Aviv have generally refrained from commenting on these discoveries, but have publicly supported what they call a "moderate" armed Syrian opposition since the start of the 2011 civil war.

A SANA reporter confirmed Tuesday that the military's operation to clear the Homs countryside of illegal arms caches would continue until all weapons there are found, allowing locals to return to the area. The northern Homs countryside was declared free of terrorists last week, after the last of the militants and members of their families were evacuated to the country's north.