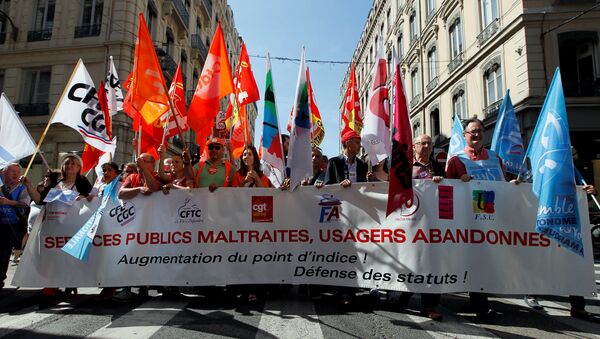 The police have used water cannons against union protesters in Paris, according to BFMTV reports.

Peaceful protests in Paris have turned into riots. Protesters have smashed windows and set on fire trash cans. As a result of the unrest, 17 people were detained, the BFMTV broadcaster reported. Earlier media reports said that police had detained seven masked protesters.

According to BFMTV, more than 16,000 people took part in the protest.

The France Info radio broadcaster reported, nine trade unions representing about 5.7 million people working in the public sector have agreed to carry out joint protests for the first time since 2010 and have organized about 130 rallies, with the one in Paris due to start at 2 p.m. local time (noon GMT).

The news outlet added that public sector employees are protesting against Macron's pledge to gradually cut 120,000 positions by 2022 as well as against the lack of funding provided to the public services.

The situation has escalated recently, when students have shown solidarity with railroad workers protesting Macron's reform in the railway sector.

#22mai 11:32am A group of students and other activists have just taken over the front of the demo in #Rennes. #parcoursupercherie #blocus Image by @TVR35 pic.twitter.com/c1BdjBikwt

The sectors of education, energy, health, postal services and transport are expected to become the most affected ones by the Tuesday protests, the media outlet said.