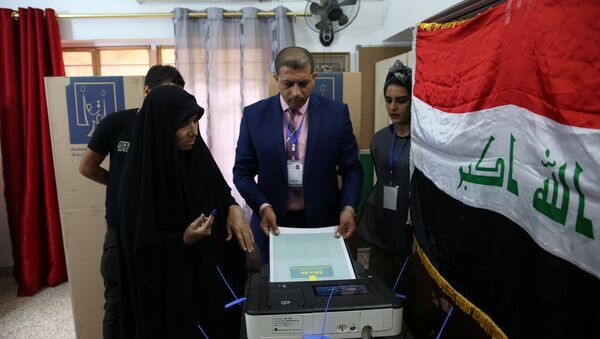 WASHINGTON (Sputnik) - Iraqi Shiite leader Muqtada al-Sadr’s success in winning the largest bloc in the Baghdad parliament gives Saudi Arabia the chance to boost its influence at the expense of Iran, former US Ambassador to Riyadh Chas Freeman told Sputnik.

"This is an opening for the Saudis, who have sought to resurrect the notion of Iraq as a balancer of a geopolitically overextended Iran and who have cultivated Muqtada al-Sadr to that end," Freeman, a former US assistant secretary of state for international security affairs, said.

Freeman assessed the outcome of the vote as reflecting the desire of the Iraqi people to elect a parliament and government that defended and advanced their own interests and not just those of either the United States or Iran.

"This is a vindication for those of us who have felt that the cure for foreign domination — including, especially, Iranian domination — of Iraqi politics and policies was Iraqi nationalism, not US intervention," Freeman said.

Sadr’s victory as a setback for both Washington and Tehran in their contest for political influence in Baghdad, Freeman explained.

"Whatever the outcome, however, it would appear certain that the influence of both the United States and Iran in Iraq will be diminished," he noted.

What You Need to Know About Parliamentary Election in Iraq
It remained to be seen whether the new parliament and the government it eventually approved would seek to strengthen ties with either the United States or Iran, or try to play both countries off against other prospective partners, Freeman warned.

"The question now, since the Sadrists need political partners, is whether they will find them among the partisans of Iran or America," he stated.

Al-Sadr's alliance won the most parliamentary seats (54) with the Conquest (Fatah) Alliance led by Hadi Al-Amiri gaining 47 seats, and the incumbent Prime Minister Haider al-Abadi's Victory Alliance earning 42 seats of the 329 in the parliament.

The views and opinions expressed by Chas Freeman are those of the speaker and do not necessarily reflect those of Sputnik.