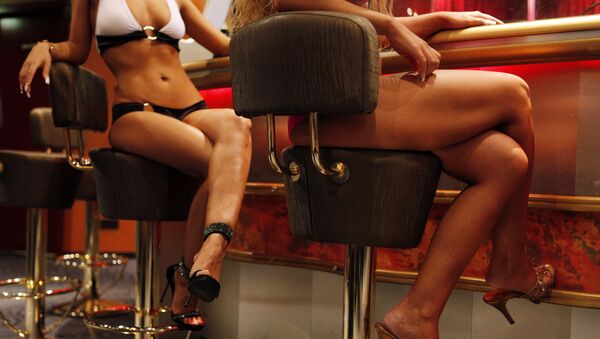 © AP Photo / Franka Bruns
Subscribe
New research by the All-Party Parliamentary Group (APPG) on Prostitution and the Global Sex Trade has determined that sex trafficking is taking place on an “industrial scale” across England and Wales.

APPG’s inquiry claimed “pop-up brothels” were widespread in England and Wales, as trafficking gangs have exploited hundreds of “vulnerable women,” predominantly from Eastern Europe. MPs found out that it has been enabled by “prostitution procurement websites,” such as Vivastreet or Adultwork, and are now calling for the criminalization of paying for sex.

Brothel With 'Mainly' Eastern European Women Busted Near UK Parliament – Reports
According to the inquiry's findings, one man is under investigation for sex trafficking, spending over £20,000 (approximately $27,000) placing ads of women on a commercial website.

MPs have suggested that the government ban these websites from adverstising and profiting from prostitution in order to solve the problem. Tackling the demand for sex buyers, among other things, has been put on the table by the parliamentarians, saying it was essential to criminalize paying for sex and decriminalize the selling of sex.

“Right now the traffickers are winning. The UK is currently a low risk destination for organised crime groups seeking to sexually exploit vulnerable women. The government must act now to combat demand for sexual exploitation by criminalizing paying for sex. It is money from sex buyers that lines the pockets of traffickers,” said Gavin Shuker, chair of the APPG.

He also added that sexual exploitation of women by organized crime groups was taking place on an “industrial scale,” with a "revolving door of vulnerable women being supplied by trafficking gangs in pop-up brothels.

“Without their demand there would be no ‘supply’ of women into this ruthless trade. Organized crime groups should also be disrupted by cracking down on the prostitution websites they use to advertise women to sex buyers. The scale on which organised sexual exploitation is taking place in this country is a national scandal. But it can – and must — be stopped.”

The leader of the Women's Equality Party, Sophie Walker, in turn, has emphasized that «organized crime groups dominate the off-street prostitution trade and make money by trafficking, threatening and coercing women – most of whom are non-UK nationals.”

“Demand from sex buyers makes the sex trade profitable for traffickers and pimps and other third parties like the websites identified by the APPG. That is why, along with removing the threat of prosecution for women who sell sex and funding exit services for those involved in prostitution, a sex buyer’s law is needed to address this form of modern slavery," she added.

000000
Popular comments
Expect to find out soon that many 'parliamentarians' are using these brothels too.
The Thoth
21 May 2018, 15:10 GMT1
000000
The British government is failing at everything. Russiaphobia as a distraction is not working. Brexit delays are harming May and her incompetent clan, the poisoning case is a flop, immigration is out of control, street violence, prostitution, taxation. Could go on and on but someone help me out and tell me what the British government has succeeded at that is a positive for the people. Anyone?
Mitach2002
21 May 2018, 16:59 GMT1
000000
Newsfeed
0
New firstOld first
loader
LIVE
Заголовок открываемого материала
Access to the chat has been blocked for violating the rules . You will be able to participate again through:∞. If you do not agree with the blocking, please use the feedback form
The discussion is closed. You can participate in the discussion within 24 hours after the publication of the article.
To participate in the discussion
log in or register
loader
Chats
Заголовок открываемого материала
Worldwide
InternationalEnglishEnglishMundoEspañolSpanish
Europe
DeutschlandDeutschGermanFranceFrançaisFrenchΕλλάδαΕλληνικάGreekItaliaItalianoItalianČeská republikaČeštinaCzechPolskaPolskiPolishСрбиjаСрпскиSerbianLatvijaLatviešuLatvianLietuvaLietuviųLithuanianMoldovaMoldoveneascăMoldavianБеларусьБеларускiBelarusian
Transcaucasia
ԱրմենիաՀայերենArmenianАҧсныАҧсышәалаAbkhazХуссар ИрыстонИронауОssetianსაქართველოქართულიGeorgianAzərbaycanАzərbaycancaAzerbaijani
Middle East
Sputnik عربيArabicArabicTürkiyeTürkçeTurkishSputnik ایرانPersianPersianSputnik افغانستانDariDari
Central Asia
ҚазақстанҚазақ тіліKazakhКыргызстанКыргызчаKyrgyzOʻzbekistonЎзбекчаUzbekТоҷикистонТоҷикӣTajik
East & Southeast Asia
Việt NamTiếng ViệtVietnamese日本日本語Japanese俄罗斯卫星通讯社中文（简体）Chinese (simplified)俄罗斯卫星通讯社中文（繁体）Chinese (traditional)
South America
BrasilPortuguêsPortuguese
NewsfeedBreaking
19:06 GMTVideo: Hundreds of Illegal Immigrants Stream Across Rio Grande Into US State of Texas
18:56 GMTPhotos: LA Parents Angered by 'F**k Police', 'F**k Amerikkka' Posters Hung in Classroom
18:53 GMTLionel Messi’s Contract With Paris Saint-Germain Leaked, Report Says
18:37 GMT'Cocooning': Biden Team Created a 'Wall' to Guard Him From Unscripted Events, Book Says
18:18 GMTThousands Rally in France Against Ban on Bird Hunt, Reports Suggest
18:08 GMTWatch Bright Flash Appear on Jupiter After Suspected Collision With Space Object
18:02 GMT'Administrative Error': Labour Party Backtracks on Threat of Misconduct Probe Into Left-Wing MP
17:38 GMTUS Fast Food Giant Subway Taunts France With 'Non-Nuclear Powered' Subs Ad Amid AUKUS Row
17:18 GMT'I Feel Humiliated': Captain Amarinder Singh Resigns as Chief of India's Punjab State
16:38 GMTWhy Did the US Ditch Its European Allies in Favour of UK and Australia to Wrangle With China?
16:29 GMTUS Pledges to Boost 'Removal Flights' to Transport Haitian Migrants Stuck Under Texas Bridge
16:12 GMT'Justice for J6': Protesters Rally in Washington, DC to Support Charged Capitol Riot Demonstrators
15:39 GMTSeveral Reportedly Injured as Car Rams Into Cafe Terrace in Fontainebleau, France
15:27 GMTMalaysia Claims New AUKUS Alliance May Spark Nuclear Arms Race in Indo-Pacific
15:08 GMTParis Being Rocked by Protests Against COVID-19 Passes for 10th Weekend in Row
14:31 GMTNotre-Dame Restorers Finish Fortification Works to Start Restoration Phase
14:19 GMTWhen Trump Asked Obama About His 'Biggest Mistake', POTUS 44 'Couldn't Think of Anything': Book
14:05 GMTFrance 'Raises Game' on Migrant Interceptions After UK Threatens to Scrap Funding to Paris
14:00 GMTFour British Ex-PMs Snub Johnson's Chequers Centenary Banquet
13:58 GMTAir Defence Strengthened in Northern Ukraine as Part of Exercises With NATO, Air Command Says