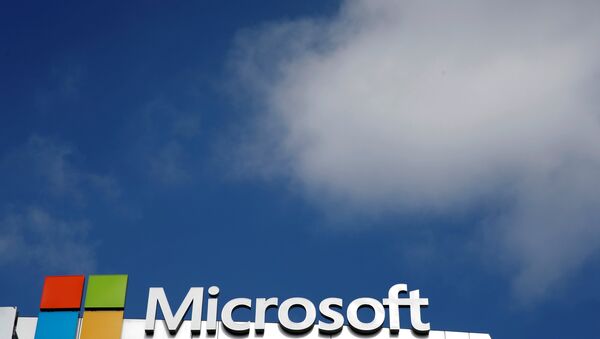 © REUTERS / Lucy Nicholson
Subscribe
The tech giant Microsoft has reached an agreement to provide 17 US intelligence agencies with its cloud-computing platform, The Washington Post reported.

According to the media outlet, citing the company's executives, the new deal will allow it to move intelligence agencies’ computer systems onto Microsoft Office 365 apps and add some cloud-based apps that had previously been unavailable to them.

READ MORE: Floating Island in Polynesia to Have Green Tech, Its Own Cryptocurrency (PHOTO)

The potentially profitable agreement could boost the tech giant's prospects for a forthcoming Pentagon cloud-computing award, the Joint Enterprise Defense Infrastructure (JEDI), a multibillion-dollar contract that has dragged some of the world's best tech companies, including Microsoft, Amazon, Oracle, IBM and the IT services unit of General Dynamics, into fierce competition.

Have Chinese Tech Companies Found a Safe Haven From US Sanctions?
For many years, Amazon Web Services, which supplies cloud computing for businesses and government agencies, has served as the key provider of cloud services to US intelligence agencies due to a $600 million deal with the CIA.

Regardless of Microsoft's recent agreement, Amazon Web Services remains the primary provider, but senior officials from Microsoft have described the contracts as an “awakening.“

"This is a huge win from a Microsoft perspective. It’s kind of an awakening as far as the intelligence community is concerned that you can’t be a one-cloud community,” Barnes added.

For years, Microsoft has provided basic computer programs to intelligence services under a contract with another computer provider, Dell. The agreement on the cloud-based technology came as part of contract renewal between the Office of the Director of National Intelligence and Dell, which is subcontracting government work to Microsoft. But what has changed is that previously, US intelligence had no access to the full kit of Microsoft Azure Government cloud services.

It is yet unclear how much Microsoft will profit from the agreement, as the exact amount will largely depend on how many orders are made by government contracting officers.