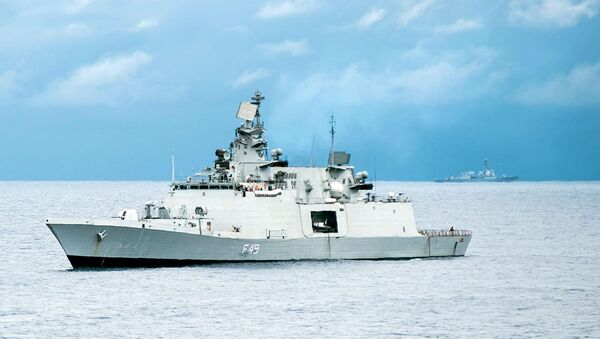 For the last few years, India has stepped up its engagement with Vietnam in what is being seen as an attempt to boost its military exports. In 2016, India offered the BrahMos supersonic cruise missile and the Akash surface to air missile to Vietnam besides announcing $500 million loan for defense purchases.

New Delhi (Sputnik) — Three warships of the Indian Navy, including a multi-role frigate and a corvette, have anchored at the Tien Sa Port in Vietnam to partake in the first-ever bilateral naval exercise that kicked off on Monday.

Officials of the Indian Navy and their Vietnamese counterparts will have a series of bilateral exchanges during the initial five days of the event while the joint exercise is scheduled for the last day. The visit is a part of the ongoing operational deployment of the Indian Navy's Eastern Fleet ships to South East Asia and North West Pacific region.

"The current visit seeks to enhance maritime cooperation between the two navies and will further bolster the strong bonds of friendship between the two countries and contribute to security and stability in the region and the world at large," the Indian Navy said in a statement on Monday.

Earlier in January this year, armies of both the countries conducted their first-ever joint exercise at Jabalpur in central India.

India and Vietnam elevated their relationship to the level of Comprehensive Strategic Partnership in 2016 during an official visit of Indian Prime Minister Narendra Modi to Vietnam. Since then, both countries have kept up the momentum in the relationship with a series of visits by top leaders, including those of the military.

The Indian Navy has had extensive interactions with the Vietnam People's Navy, particularly in the field of training, repairs, maintenance and logistics support aimed at capacity building. The last visit by Indian naval ships to Vietnam was in September 2017, when two of its ships, the INS Satpura and INS Kadmatt, visited Hai Phong port.