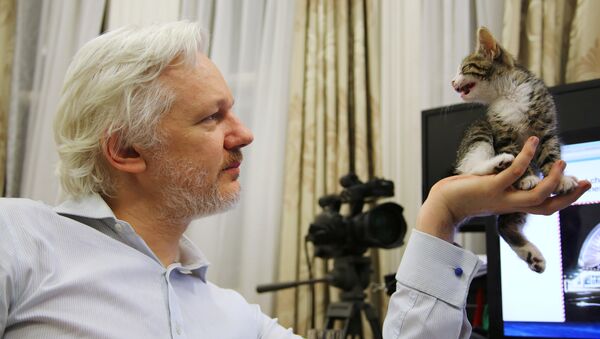 Former Ecuadorian President Rafael Correa has blasted the country’s government for depriving WikiLeaks founder Julian Assange of access to the outside world. Meanwhile Ecuador’s Foreign Minister Maria Espinosa stated that she and the UK share the intention to solve the issue. Sputnik spoke with Greg Barns, a member of Julian Assange’s legal team.

Sputnik: What are your thoughts on the remarks made by the former Ecuadorian president? Do you agree with them?

Greg Barns: The comments by former President Correa were absolutely right. In fact they are in line with what the United Nations is saying which is that Julian Assange is being kept in conditions which do amount, effectively, to torture.

He has been unlawfully detained now since 2012 and it is important that Ecuador, which rightly gave him asylum and should be applauded for that, maintains its independence from the United States.

Certainly, the United Nations would say, because it is clear that if you keep a person locked away inside without any fresh air 24 hours a day for six years, that amounts to torture and it certainly amounts to torture if you look at the international conventions relating to the treatment of prisoners.

Julian Assange is treated, in this sense, worse than any prisoner.

Sputnik: What is his [Julian Assange’s] health like emotionally and physically?

But the bottom line is you can’t keep someone in those conditions for as long as he has been kept and expect their health not to deteriorate rapidly.

It is certainly having an impact on his health, both mental and physical. I mean one of the issues here is, of course, what needs to happen is that there needs to be some resolution of this matter and certainly I am working on strategies within Australia to try and see whether or not the Australian government would get involved.

Sputnik: What are your thoughts on all of this and has this changed at all since Trump became president?

Greg Barns: We have heard some extraordinary statements made by people, including the Attorney General Jeff Sessions, saying that Julian’s arrest remains a high priority.

I mean the reality is that nations need to understand that they are independent and sovereign and they are not there simply there at the beckoned call of the United States. That is concerning. It’s always concerning in Australia and I live here and we’ve seen over the weekend Australia refusing, very sadly to support a UN resolution in relation to the conduct of Israel in the last few weeks, because of US pressure. Countries need to stand up.

READ MORE: Julian Assange's Internet Access Has Been Cut Off

But look, the bottom line is: you have a human being, he has family members they are really suffering and there needs to be a resolution.

Countries need to stand up against the United States. I mean particularly the United Kingdom. The UK purports to uphold the rule of law, human rights and yet in this particular case it’s taken a very cavalier attitude to Julian Assange and his plight.

It’s extraordinary in a country which purports to uphold the rule of law, that it would be so cavalier in its treatment of a particular individual, simply because the United States doesn’t like this person.

The views and opinions of Greg Barns are those of the speaker and do not necessarily reflect those of Sputnik.