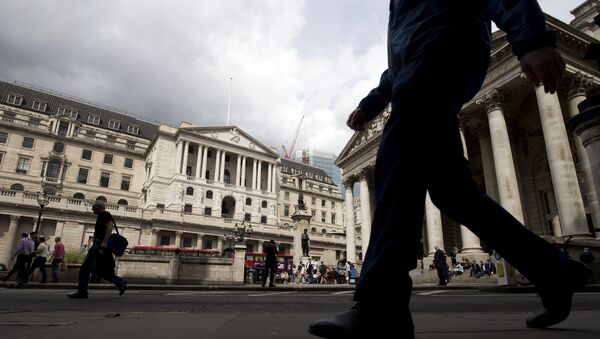 © AFP 2022 / JUSTIN TALLIS
Subscribe
A top British central bank policymaker has been forced to apologize over his public use of "vulgar” professional terminology after a tidal wave of angry comments on Twitter.

Kristian Rouz – Bank of England (BoE) Deputy Governor Ben Broadbent has apologized after expressing his disappointment over the sluggish pace of UK economic expansion in what some considered a "vulgar" language. Discussing the economic slowdown in the first quarter of this year, Broadbent said the British economy is "menopausal."

In an interview with the Telegraph, Broadbent said that the UK’s low labor productivity crisis suggests that the overall productive forces in the country are "past their peak and no longer so potent."

Broadbent also said the current macroeconomic conditions in the UK were akin to the late 19th century, when the power of steam – which had propelled the Victorian-era economy to stunning heights – had worn out, whilst the age of electricity had yet to transform the UK into a high-productivity economy.

He urged major technological shifts in order to overcome the UK’s sluggish pace of economic expansion.

Foot in Mouth Syndrome: Netanyahu Serves Japan’s Abe ‘Offensive’ Dessert in Shoe
This comes after the UK economy slowed to a 0.1-percent quarter-on-quarter expansion in Q1, after growing 0.4 percent in 4Q17. This happened due to cold weather conditions, which hindered personal consumption and manufacturing activity, whilst overall base macro fundamentals have remained largely the same – suggesting the UK is on course to a major rebound in the current quarter.

The deputy governor’s explanation of his previous remarks turned out to be somewhat controversial as well. Broadbent said back in the 19th century, the UK’s productivity "slowed pretty much to a halt" and entered a ”climacteric” — period, which, according to the deputy governor, means "you've passed your productive peak."

"It has the same Latin roots as 'climax' and means 'menopausal' but it applies to both genders," Broadbent said.

In a separate statement, the BoE provided a further explanation of the deputy governor’s words, and also addressed the state of the British economy, which – in light of last quarter’s reports – some found alarming.

“I was explaining the meaning of the word "climacteric,", a term used by economic historians to describe a period of low productivity growth during the nineteenth century. Economic productivity is something which affects every one of us, of all ages and genders,” Broadbent said in the BoE official statement.

The official BoE statement came in response to a flurry of angry comments on Twitter, where the public expressed their dissatisfaction with the alleged ”sexism” of the deputy governor’s remarks.

Such claims, however, are hardly viable, as a period of calm after a robust expansion are widely referred to as ”menopausal” in the professional slang of financial experts – as Broadbent correctly pointed out.

Meanwhile, the deputy governor also provided an explanation to the current sorry state of the British productive forces. He said the existing theories pertaining to the matter would be a source of deliberations for many years, as even 150 years after the last ”menopausal” period in British economic history, experts still disagree what caused it.

'How Can Shorts Be Sexist?' 8-Year-Old Girl in UK Makes the Case
There are several possible explanations to the low productivity growth. Low central bank interest rates – and, consequently, low credit costs for consumers and businesses – are life support for low-productivity "zombie companies."

Loose monetary policies might also be dis-incentivizing low-income households from seeking sources of higher income by moving town-to-town and changing their profession.

Additionally, productivity measurement methods might be irrelevant, as the existing statistical methodology developed prior to the technological shifts and the rise of digital economy in the recent years.

"I don't have high expectations of our knowing precisely what's going on at the moment," Broadbent said.

The "menopausal" economy controversy has also revealed another alarming trend in the public discourse. This might be a dangerous precedent of SJW-minded Internet users attacking professional terminology – used by financial experts and policymakers for decades – as "offensive."

Heated debates online might also entail another concern. While labor productivity in key sectors of the economy remains low, the volumes and productivity of discussions on the Internet is hitting its new highs – raising questions of labor participation, its correlation with the effects of welfare state system, and their broader implications for GDP growth.