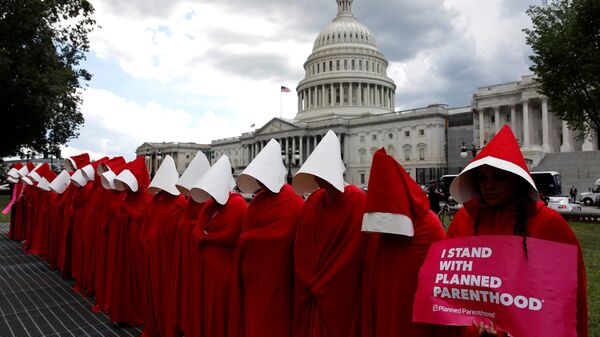 This, as many critics have pointed out, would effectively shutter Planned Parenthood and similar organizations that receive federal funding and do provide abortions — but also provide a host of other important medical services, including wellness exams, birth control and mammograms — unless they stop offering abortion service or even helping patients access the services elsewhere by referring them to other clinics.

"What's happening now is that they're trying to make a distinction between abortion and other types of reproductive health care," Norwood told show host Walter Smolarek. "Effectively, at least in my perception, it's an intent to further this idea that abortion is something that bad people do and it's something that is birth control for women that are irresponsible. If these clinics continue to provide abortion services, they will not get the funding that has been used for all these years to provide so much health care that low-income women may not get elsewhere."

"It's being presented as a sort of moral issue and I think the involvement of [US President] Donald Trump — who is, I think, by any measure, not a moral character — just makes it clear that this isn't about caring about children, caring about women; it's not about having a Christian nation or whatever it is that they're using to sell this idea to conservatives or the religious right," she stressed.

Rather, according to Norwood, the entire push "is a complete political manoeuvre, it is a power grab."

"It is taking away one of the most fundamental rights to your body and the right to health care and the right to choose whether and when to start a family. I buy the idea that Donald Trump wants to reduce the power that women have in society — I don't buy the idea that Donald Trump cares about whether or not we actually have abortions," she told Smolarek.

Noting that abortions make up a small percentage of the services offered by Planned Parenthood, Norwood pointed out that the Trump administration's move is threatening "things that have a really huge impact on your life."

"It's not just about abortions, it's about birth control, cervical cancer, mammograms, all these things that are essential to women's health, and often Planned Parenthood is the last resort," Norwood said. "Because the Trump administration and the far right want to politicize the issue and make it a rallying point for conservatives, all these other essential functions are being jeopardized."

Norwood also says just encouraging people to lobby or vote in order to assert their reproductive rights isn't the best way to tackle the issue.

"If lobbying or voting worked, we wouldn't be in this position. I think that the perception that all change is made in the voting booth kind of lays the blame for these attacks on voters' feet when we're not given the chance to vote on most things that impact our lives," she said. "We weren't given the chance to vote on this reduction of funding for essential services."

At the end of the day, Norwood urged that it's going to take "more than just being on the right side of things."

"It's going to take fighting," she concluded.