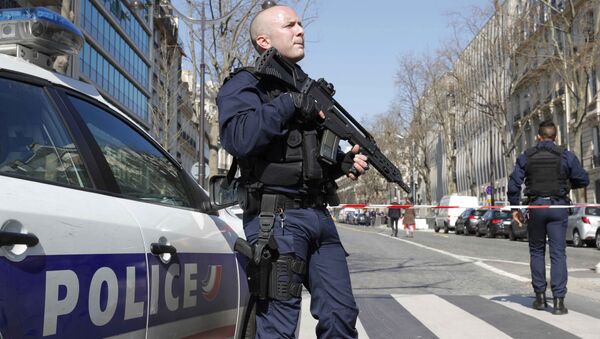 French authorities have shown vigilance in the wake of jihadist activity, including the latest knife attack in Paris last Saturday, committed by a 20-year-old Chechen-born French citizen, with the Daesh* terrorist group claiming responsibility for the incident.

French Interior Minister Gerard Collomb told BFM television that authorities had arrested two men of Egyptian origin who were "preparing to commit an attack with explosives or ricin," adding that they had tutorials on how to make explosives and poison using ricin.

"We were able to detect them, detect this attack plan and were able to arrest them," the French minister stated, describing the perpetrators as brothers.

The New York Times newspaper reported that, citing a judicial official, the young man, identified as Mohamed M., was arrested a week ago and handed preliminary terrorism charges. Another man was arrested with him, but was later released by the police.

The announcement follows an attack last Saturday when a young man began to stab people, screaming "Allahu Akbar" in the center of Paris, leaving 1 dead and four injured.

France, Chechen Republic Head Trade Accusations Over Paris Attacker
The assailant, who was later killed by police, was identified as Khamzat Azimov, a French citizen born in 1997 in Russia's Chechnya. Europe 1 radio reported that Azimov was already known as a threat to French intelligence. After the attack, a friend of his was arrested and given preliminary terrorism charges, the prosecutor's office claimed.

According to French media, a string of jihadist attacks has killed over 245 people in France over the past three years.