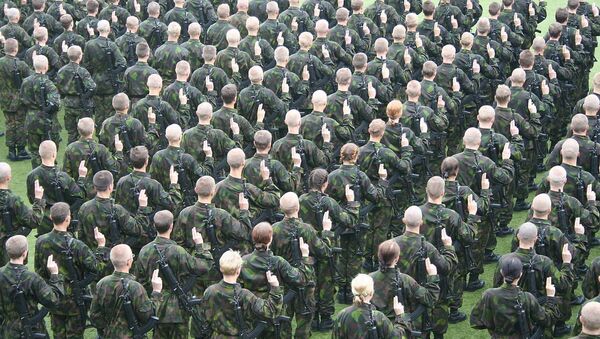 CC BY-SA 2.0 / Karri Huhtanen / Finnish conscripts giving their military oath
Subscribe
With his proposal to close the door to female soldiers in order to ward off the "disastrous consequences" of the state savings program, Finland's defense minister has triggered national outcry among politicians, journalists and ordinary Finns alike.

Finnish Defense Minister Jussi Niinistö of the newly founded Blue Reform party has listed a temporary stop for female volunteers as a means to counter the planned savings program, which he ventured, would hit the Finnish defense "unreasonably hard," national broadcaster Yle reported.

According to Niinistö, it is not possible to maintain a credible defense in the current era, which he called "insecure."

"I'm not going to repeat the same mistakes that were made by the former government when garrisons were taken down and disbanded," Niinistö pledged, stating that future savings measures cannot and won't affect the basic operations of the national defense.

According to Niinistö, a halt in drafting women would save €4 million ($4.7 million) a year. Enrolling women in just one of the two annual drafts would, by contrast, save half of this sum.

Crisis operations abroad are another area where Niinistö sees an opportunity for saving funds. At present, Finland has about 500 people involved in various international crisis missions, the majority of whom are stationed in Lebanon and Iraq.

"We should remain in the major operations and get out of smaller assignments around the world," Jussi Niinistö suggested.

Finland's Reservist League was critical of Niinistö's proposal. Its Vice President Terhi Hakola stressed that women who have committed themselves to military service have proven to be well-motivated and have generally received a good response for their service. Hakola also suggested budget hikes instead of cost-saving measures.

Ilkka Kanerva, the chairman of the parliamentary defense committee, also slammed the defense minister's proposal, suggesting that Niinistö was "looking to provoke." Kanerva has previously proposed a mandatory draft for both men and women.

Niinistö's proposal sparked a hot debate on Twitter, with many users arguing against manmade obstacles barring women from entering service, calling it "absurd."

"For a younger generation, the idea that men are better fitted for defense seems all the more ridiculous," Swanljung said, stressing that women often seek leadership education, outperforming their fellow male warriors.

Lastly, while Niinistö's proposal would at the most help Finland save €4 million, the Nordic country plans on buying ships for at least €1 billion and fighter jets for at least €10 billion, dwarfing the eventual savings.

Niinistö himself later admitted that the proposal of stopping women was a conscious move in a bid to draw attention. He also admitted that he was prepared to face controversy.

At present, the Finnish Defense Forces employ some 12,000 people, of which only 2,600 are women. The Finnish defense is based on universal male conscription. Women were granted the right to serve in the army in 1995, and their percentage has been rising ever since.