Enough is Enough: EU to Block US Sanctions on Iran to Protect European Firms 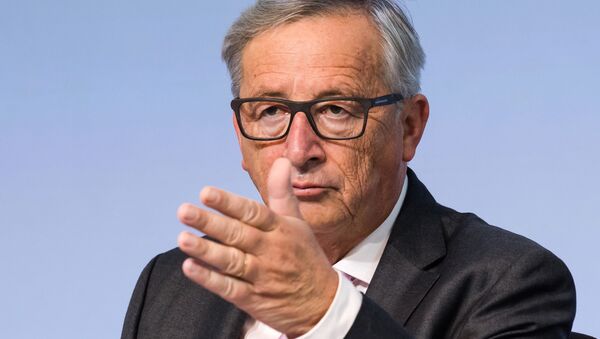 US President Donald Trump’s decision to walk away from the 2015 nuclear agreement with Iran has raised serious concerns and worries among America’s European allies.

In a clear response to the US move, EU Commission President Jean-Claude Juncker has announced that the bloc plans to apply a 1996 law that would prohibit European companies from complying with any sanctions the US will reintroduce against Tehran, Deutsche Welle reported.

"As the European Commission we have the duty to protect European companies. We now need to act and this is why we are launching the process to activate the 'blocking statute' from 1996," Juncker said during Thursday’s meeting of EU foreign ministers in Sofia, Bulgaria.

He added that the law would be launched Friday morning.

EU May Use EIB to Help European Companies in Iran Amid US Sanctions - Belgian PM
In addition, Jean-Claude Juncker noted that EU leaders had “also decided to allow the European Investment Bank to facilitate European companies' investment in Iran" and that the European Commission would continue to cooperate with Iran.

A blocking statute is a law enacted in a local jurisdiction that attempts to hinder the application of a law made by a foreign jurisdiction and is widely seen as an attempt to put pressure on Washington not to punish European firms that continue doing business with Iran.

The other signatories to the 2015 nuclear deal with Iran have pledged to stick to its terms and urged Tehran to do the same.

During their meeting with their Iranian counterpart Mohammed Javad Zarif earlier this week, EU foreign ministers discussed how best to keep the nuclear agreement alive without the US.

Iran has always denied it sought a nuclear weapon and accuses Israel of stirring up the world’s suspicions against it.