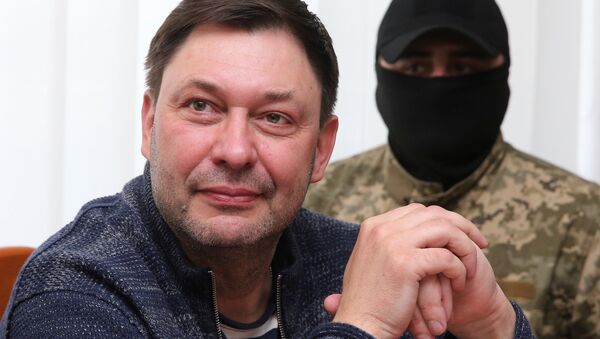 GENEVA (Sputnik) – The Office of the United Nations High Commissioner for Human Rights is concerned about the increasing numbers of attacks against media professionals in Ukraine and is examining the detention of a RIA Novosti Ukraine journalist and raids in its Kiev offices, spokeswoman Ravina Shamdasani told Sputnik on Thursday.

"The UN Human Rights Monitoring Mission in Ukraine closely follows all cases when freedom of expression and freedom of the media are at risk. We are concerned with the increasing number of attacks against media professionals in Ukraine – a trend observed by media experts since the start of 2018 … For example, we are now examining the situation regarding an arson attempt against ‘Inter’ TV channel in Kyiv on 9 May; and the search by the State Security Service of Ukraine of the offices in Kyiv of RIA Novosti news agency and the detention of its bureau chief, charged with state treason," she said.

According to Shamdasani, the organization will present its findings in its quarterly report, to be released in late June.

The day before, Human Rights Watch Europe and Central Asia Division Deputy Director Rachel Denber urged the Ukrainian authorities to immediately clarify evidence to substantiate the criminal accusations against Vyshinsky. For his part, OSCE Representative on Freedom of the Media Harlem Desir urged Kiev to refrain from imposing "unnecessary limitations" on foreign journalists that impact the free flow of information and press freedom.

Journalists Worldwide Mark Solidarity With RIA Novosti Journo Detained in Kiev
Vyshinsky was detained in Ukraine’s capital of Kiev on charges of treason on Tuesday. The Ukrainian Security Service (SBU) accuses Vyshinsky of supporting the self-proclaimed Donetsk People's Republic (DPR) and Luhansk People's Republic (LPR) in Ukraine's southeast. Earlier on Wednesday, Vyshinsky’s lawyer said that the authorities began the prison transfer of the journalist from Kiev to Kherson, where they will determine a measure of restraint for him.

The same day, the SBU also broke into the office of RIA Novosti Ukraine in Kiev. Rossiya Segodnya news agency Director General Dmitry Kiselev has demanded that the Ukrainian authorities free Vyshinsky immediately and end their persecution of the media.

Margarita Simonyan, the editor-in-chief of Rossiya Segodnya and RT broadcaster, has stated that she thought what was happening in Ukraine was Kiev’s "revenge" for the recently opened Crimea Bridge. She further noted that RIA Novosti Ukraine was not legally linked to Rossiya Segodnya, but was its media partner.