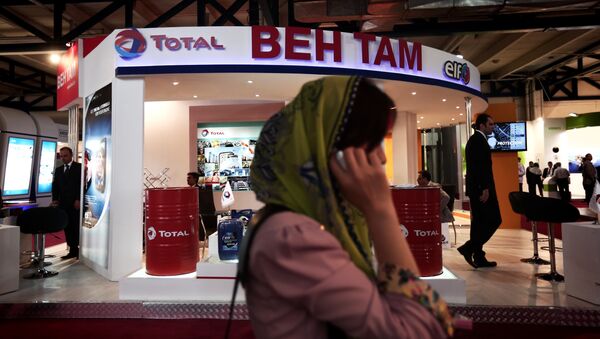 © AFP 2021 / BEHROUZ MEHRI
Subscribe
France, Britain and Germany are currently in talks with Tehran in a bid to try to salvage the Iran nuclear deal after Washington's withdrawal from the agreement earlier this month.

The French oil giant Total said in a statement that work on its  40-million-euro (47-million-dollar) gas project in Iran will be scrapped unless the company is exempt from the US' looming anti-Iranian sanctions.

"Total will not be in a position to continue the SP11 project and will have to unwind all related operations before November 4, 2018 unless Total is granted a specific project waiver by the US authorities with the support of the French and European authorities," the statement said.

READ MORE:  US Iran Deal Exit 'Chance for Europe to Once & For All Pursue Own Policy' – Prof

Total called for a waiver that would stipulate the company's protection from "any secondary sanction as per US legislation."

Total underscored it would be highly vulnerable to possible US sanctions given that the company has a whopping 10 billion dollars of capital employed in its US assets, while American banks are involved in 90 percent of Total's financing operations.

Brent crude oil price has, meanwhile, hit 80 dollars per barrel, its highest since November 2014, after Total's announcement, which also prompted US West Texas Intermediate crude futures to increase by 18 percent to 71.67 dollars per barrel, according to Reuters.

Earlier, EU foreign policy Chief Federica Mogherini said that the foreign ministers of Iran, Britain, France and Germany had agreed to task experts with protecting European business in Iran and that further talks on the matter are expected.

"We are working on finding a practical solution to keep the deal alive," Mogherini pointed out.

European Commissioner for Migration and Home Affairs Dimitris Avramopoulos, for his part, said that the EU is discussing "the possibility of applying our blocking statute" to protect the interests of European companies from the re-introduction of US anti-Iranian sanctions.

US Putting Serious Pressure on Iran Nuclear Deal Participants - Moscow
On May 8 President Donald Trump announced his decision to withdraw the US from the Iran nuclear deal, also pledging to reinstate the anti-Iranian sanctions that were lifted as a result of the agreement.

000000
Popular comments
Seems Total is then totally screwed ... Never been a case of American Independence, more like American Engineered Dependence. In a decent and upstanding World-- Big offshore Oil related Corps, would be safeguarded by contract clauses guaranteeing their ops remain free of global geopolitical interference, ensuring global oil markets remain steady and supply uninterrupted. But in the dog-eat-dog world we live in, based on western crony capitalism, serving only the few, exploitation is the only watchword-- not a cent can be lost, fair and just practices, since forever gone to the wall, profits alone matter in the killing fields of Oil's stolen dirty lucre. How many countries laid waste, millions of people dead and or fleeing the ruthless and cruel onslaughts demanded by Big Oil! No, the monstrous head of the western greed crazed octopus must be severed once and for all! For then only, will all nation states have a fair chance to grow and thrive on all fronts and the global economy, no longer hijacked by a few mad money grabbing moguls-- ensuring by hook and by crook global division-- become stable and strong, benefiting all, in what long ago has become a multi-polar world.

choticastile
17 May 2018, 13:55 GMT1
000000
choticastile, in a capitalist world where imperialism reigns there is no chance for equal chances, fair trade benefiting everyone and of course nothing good for normal working class people. Multi-polar world without destroying capitalism is a transit period until a new imperium is created.
giorgoskaz11
17 May 2018, 14:45 GMT1
000000
Newsfeed
0
New firstOld first
loader
LIVE
Заголовок открываемого материала
Access to the chat has been blocked for violating the rules . You will be able to participate again through:∞. If you do not agree with the blocking, please use the feedback form
The discussion is closed. You can participate in the discussion within 24 hours after the publication of the article.
To participate in the discussion
log in or register
loader
Chats
Заголовок открываемого материала
Worldwide
InternationalEnglishEnglishMundoEspañolSpanish
Europe
DeutschlandDeutschGermanFranceFrançaisFrenchΕλλάδαΕλληνικάGreekItaliaItalianoItalianČeská republikaČeštinaCzechPolskaPolskiPolishСрбиjаСрпскиSerbianLatvijaLatviešuLatvianLietuvaLietuviųLithuanianMoldovaMoldoveneascăMoldavianБеларусьБеларускiBelarusian
Transcaucasia
ԱրմենիաՀայերենArmenianАҧсныАҧсышәалаAbkhazХуссар ИрыстонИронауОssetianსაქართველოქართულიGeorgianAzərbaycanАzərbaycancaAzerbaijani
Middle East
Sputnik عربيArabicArabicTürkiyeTürkçeTurkishSputnik ایرانPersianPersianSputnik افغانستانDariDari
Central Asia
ҚазақстанҚазақ тіліKazakhКыргызстанКыргызчаKyrgyzOʻzbekistonЎзбекчаUzbekТоҷикистонТоҷикӣTajik
East & Southeast Asia
Việt NamTiếng ViệtVietnamese日本日本語Japanese中国中文Chinese
South America
BrasilPortuguêsPortuguese
NewsfeedBreaking
01:00 GMTWho has the Edge Between Manchester United and Liverpool?
00:12 GMTBritish Military Brings Over 100 People Who Had Left Afghanistan to UK - Defense Ministry
YesterdayUS Seeking Clarity Over Turkey’s Intention to Declare US Ambassador Persona Non Grata
YesterdayUS Authorities Getting Veterans Involved in Resettlement on Afghan Refugees - Reports
YesterdayBiden’s Popularity Drops More Than That of Any Other US Leader Since End of WWII - Poll
Yesterday‘Rust’ Director ‘Gutted’ by Fatal Shooting of Halyna Hutchins on Set
YesterdayPotty-Mouthed PM: Broadcaster Blocks Boris Johnson's Remarks on Gay Men, Muslim Women
YesterdayHome Run! The Astros Win a Ticket to the World Series Amid Sign-Stealing Scandal
YesterdayColombian Authorities Reportedly Capture Elusive Drug Lord Otoniel, Leader of Clan del Golfo
YesterdayTwitter CEO Jack Dorsey Issues Cryptic Warning of ‘Hyperinflation’ Soon To Happen in the US
YesterdayOne Person Killed, 7 Injured in Shooting Near University Campus in US
YesterdayIran Set to Cooperate With Islamic World in Nuclear Development - Spokeperson
YesterdaySupermarkets in UK Reportedly Use Cardboard Cut-Outs to Disguise Empty Shelves
Yesterday5.0 Magnitude Earthquake Shakes La Palma as Spanish Island Territory Reels From Volcano Eruption
YesterdayJeremy Clarkson Slams 'F***ing Government' at Farming Awards Ceremony - Video
YesterdayPakistan Denies Reports of Preparing to Sign Airspace Agreement With US
YesterdayWatch Massive Migrant Caravan Push North Into Mexico as US Reports Record Apprehensions
YesterdayWatch Iranian Governor Getting Slapped on Stage During His Inauguration
YesterdayAssange's Extradition Incomprehensible After Revelations CIA Plotted to Kill Him, Fiancée Says
YesterdayUnderwater Treasure May Point to Location of Long-Gone 'Island of Gold' Empire