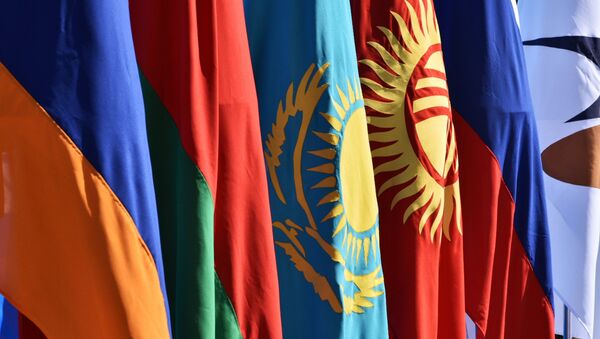 On Thursday, the five-nation economic bloc of Armenia, Belarus, Kazakhstan, Kyrgyzstan and Russia struck a provisional free trade deal with Iran and an agreement on trade and economic cooperation with China.

In December 2016, the EAEU and Iran started working on a free trade agreement with a view to boosting mutual economic cooperation. Veronika Nikishina, the minister for trade of the Eurasian Economic Commission (EEC), the EAEU executive body, in an interview with Sputnik, recounted the long way that the sides had come to secure the deal.

The minister noted that having reached an agreement to launch talks on the issue, the sides had established a special joint research group tasked with determining the most promising areas for preferential trade.

Putin Invites EAEU Leaders to Attend 2018 FIFA World Cup in Russia
The group ultimately concluded that it would be more reasonable to strike a "provisional agreement, which will cover a limited set of goods, in order to evaluate which impact it will have on mutual trade," and only then switch to a full-fledged free trade area, Nikishina noted, adding that the range of goods and the deal’s timeframe had been the main sticking points during the negotiation process.

As a result, the sides signed a provisional agreement which will last for three years and pave the way for a full-fledged free-trade deal.

"The provisional agreement is an agreement covering a limited set of goods and with a limited level of liberalization. It was made to enable the sides to yield benefits of liberalization just after the agreement takes effect. Since the agreement will last for only three years we could not allocate time for those sectors which are not involved in exports to Iran to ‘warm up.’ The agreement, thereby, mainly aims to boost positions of the existing exporters," she said.

According to Nikishina, the union has received tariff concessions on a wide range of goods in agriculture, such as beef, lamb, butter, mineral water, grains, tobacco, and on such exports items as steel, cosmetics, timber, tractors and buses. Iran’s concessions to the union are estimated at about $1 billion in monetary terms, she added.

The minister noted that the provisional agreement established a trade regime which is similar to WTO rules while stipulating certain transition periods to let Iran, which is not a WTO member, adapt to new provisions.

"So, our agreement not only reduces tariffs but also removes non-tariff barriers, increases predictability and attractiveness of the Iranian market," she said, clarifying that the country's legislation had previously lacked transparency and non-discrimination norms which are commonplace in WTO member states.

Such non-tariff barriers are actually the main hurdles that businesses face while seeking to expand into the Iranian market, she stressed.

Nikishina also noted that the Iranian legislation stipulated minimum four–percent import duties, and Iran had notified the union that it was not ready to negotiate this very sensitive issue. As a result, the sides agreed fixed tariff discounts for EAEU countries, she specified.

On the Way Toward  Full-Fledged Free Trade Area

The ultimate removal of import duties is set to be a subject of negotiations on the full-format trade area, the minister stressed.

"I am convinced that the regime of preferential trade between the union and Iran will have a positive impact not only on the signatories to the agreement but also on the whole Middle East and Central Asia, since a new center of trade and economic gravity will be created. I think that the implementation of the agreement will facilitate the accelerated development of infrastructure of the international ‘North-South’ transport corridor which runs through Iran and Russia through the Caspian Sea," she pointed out.

The official noted that the greatest asset of the agreement for the union is access to the growing Iranian market with more predictable "rules of the game" in place.

"Under the circumstances, when internal consumption on decline and economic growth rates are slowing down, such an opportunity should not be underestimated. Specifically, it should not be overlooked that there is a growing middle class in Iran who wish to purchase goods at accessible prices," Nikishina said, adding that the provisional agreement gave EAEU countries competitive advantages over other economic players on the Iranian market.

Nikishina also specified that the agreement would come into effect in a 60-day period after all the required legal procedures in Iran and EAEU countries were finalized, and expressing belief that it would not take too much time due to the mutual interest in streamlining trade.

Over the next three years after the agreement's entry into force, the sides will be conducting talks on a full-fledged free trade agreement.

"In any case, I am sure that the provisional agreement is only the first step toward deeper trade and economic cooperation of Iran and the union, and all the parties concerned are benefiting from this process," she concluded.

In the interview, Nikishina also dwelt on the EAEU agreement on trade and economic cooperation with China.

Israel, EAEU Resume Talks on Free Trade Agreement - Israeli Ambassador in Russia
The EAEU and China had been negotiating the agreement on trade and economic cooperation over the past two years with a view to further reducing non-tariff trade barriers, boosting trade facilitation, creating a positive environment for industrial development, and promoting integration on the Eurasian continent.

According to Nikishina, the agreement provides a set of dialogue mechanisms and lays the basis for further sectoral agreements between the EAEU and China aimed at the removal of non-tariff barriers and mutual recognition of safety requirements and conformity assessments.

The deal also seeks to provide businesses with assistance in their expanding into new economic markets, by establishing special information centers.

According to the minister, the agreement covers a wide range of issues, including intellectual property rights, anti-counterfeiting activities, competition, public procurement, consumer protection in e-commerce, and others.

READ MORE: Tehran Looks at Russia, China to Save Nuke Deal as US Quits Agreement — Zarif

Nikishina noted that the agreement went beyond WTO rules in terms of transparency and predictability of trade regulations. The agreement, for example, provides for mechanisms of early notification about possible trade restrictions, the minister added.

"The agreement on trade and economic cooperation was devised within the logic of 'windows of opportunity,' which are to be gradually opened in cooperation among governments, and does not stipulate some full-format automatic reduction of trade barriers. So, our business should not fear of shock changes in the competition environment," she stressed.

In conclusion, Nikishina expressed hope that the agreement would prop up the upward trend in trade between the EAEU and China, which reached $102.7 billion last year, demonstrating a 31-percent increase year-on-year.

The EAEU is an economic bloc of such former Soviet republics as Armenia, Belarus, Kazakhstan, Kyrgyzstan and Russia that encourages regional economic integration through the free movement of goods, services, and people within the union.