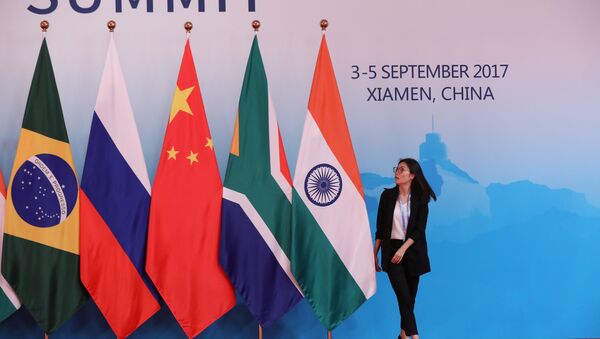 © REUTERS / Wu Hong/Pool
Subscribe
International
India
Africa
WASHINGTON (Sputnik) - Brazil is interested in enhancing the New Development Bank, which was established by the BRICS group of emerging economies, secretary of the Economic Section at the Brazilian Embassy in the United States, Diogo Ramos Coelho, told Sputnik.

"The BRICS has been very successful in establishing the NDB and strengthening it," Coelho said. "There is a strong interest of the Brazilian government to strengthen the NDB: To make it stronger and even to increase the participation of countries in the bank, to take it to the next level, to have more projects."

Brazil’s Petrobras Would Like to Have Greater Cooperation With Russia
The New Development Bank was established by BRICS in July 2014 to finance infrastructure and sustainable development projects both within the BRICS and in developing countries.

Coelho also pointed out that cooperation within the BRICS is growing, and stressed that it is now a very good moment for integration between the developing economies.

"We face a lot of difficulties in terms of multilateralism and to have the group together and stronger is, of course, in interest of Brazil," he said. "This administration is really focused on increasing cooperation with the BRICS."

Russia
Russia in Talks with Argentina, Brazil on Joining Global Anti-Terror Database
Coelho also noted that BRICS serves as a good platform for expanding and enhancing ties between Russia and Brazil.

"Our partnership with Russia has grown a lot in recent years, and Brazil is really interested in strengthening ties with Russia, not only in economic terms but also in cultural terms," Coelho said. "Using the BRICS platform is a good way to increase that cooperation."

Coelho stressed that Brazil’s government has a strong focus on promoting stronger economic and cultural ties between the countries.

The Brazilian diplomat was speaking on the sidelines of the "Doing Business with the BRICS" conference in Washington, organized by the Eurasia Center and the Eurasian Business Coalition.